Denmark is flat country – so flat, that the second highest point – Skamlingsbanken is all of 370 ft high. But it offers a lovely view of southern Denmark and you can spend a quiet, refreshing morning there…. like we did, complete with a picnic basket and soda that topples over a lot. 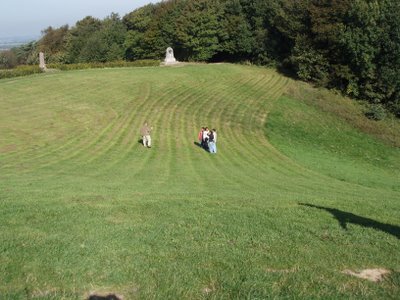 Right on top of the hill (bank is an old Danish word for hill) stands a tall obelisk – a memorial erected to commemorate the Danish nationality and way of life. It was erected at a time when the Danes were trying to fight off German aggression on the southern front. But in 1864, the Germans led a successful invasion and captured the south of Denmark and one of the first things they did was to blow away the stones of this symbol that their captives took great pride in. But villagers living around the area collected the stones and rebuilt the obelisk. The Germans left southern Denmark in 1920 after a plebiscite and have not staked their claim since. But it left behind a minority of Germans and Danes on both sides of the German-Danish border. 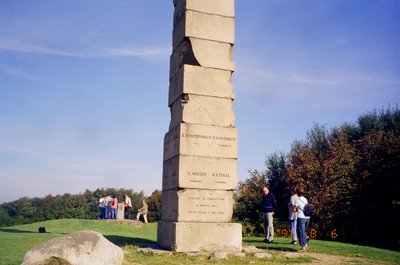 Today of course things are calm but Danish parents will still not send their kids to German schools or German parents to Danish schools for that matter, and, the older generation would still frown upon a German-Danish marriage.

There is a large Danish minority in the north German town of Flensburg where Danes like to drive down to do their shopping. People pay such high taxes in Denmark that its cheaper for them to drive down to Germany and do some monthly shopping there. Especially if they’re buying the famous Flensburger Pilsener also called Flens. 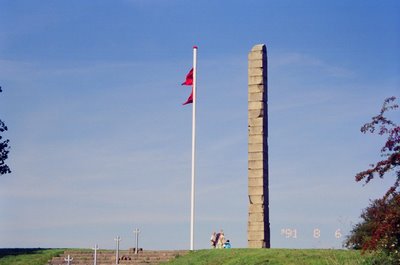 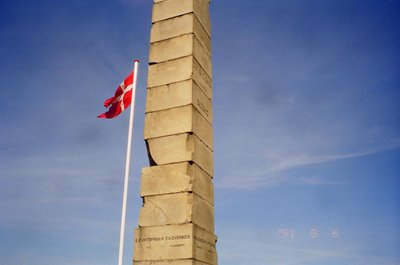 Back to Skamlingsbanken – and the great fluttering red flag next to the obelisk. Denmark’s national flag called the Dannebrog (old Danish for “The Danish cloth”) is red with a white cross that is not exactly in the center but a little to the left.

Its one of the oldest flags in the world. Legend has it, that during the Battle of Lyndanisse, in present day Estonia, it descended from the heavens at a crucial juncture, resulting in a Danish victory and given the Danish reverence for their flag, it goes without saying that the flag should flutter proudly next to the restored obelisk.