On a windy, grey afternoon in Washington D.C. on Wednesday, the names of four Philadelphia Police Officers were engraved on the marble walls of the National Law Enforcement Officers Memorial.

Sergeants Stephen Liczbinski and Patrick McDonald were shot and killed by armed criminals while Sgt. Timothy Simpson and Officer Isabel Nazario died in vehicle crashes. "They join 247 other members of the Philadelphia Police Department who made the ultimate sacrifice throughout history as the 3rd highest total of any municipal police agency in the United States" said Craig W. Floyd, Chairman and CEO of the National Law Enforcement Officers Memorial Fund. The Philadelphia Police Department had the highest fatality figure in the United States in 2008.

Nearly 45 Philadelphia police officers and commanders came down to the nation's capital for the ceremony. They stood in a row behind family members watching the names being engraved on the wall.

Kevin Hodges, the 4th commander of the 24th police district was in command when Sergeant Simpson was killed. He said "Unfortunately for these families in a 7 year period, we hadn't lost any officers. Unfortunately in the last 24 months we have lost 7 officers"

While 2008 was a bad year for the Philadelphia Police Department, according to research done by the National Law Enforcement Officers Memorial Fund, 2008 actually witnessed a sharp drop in overall gun-related deaths in the police. However for the 11th straight year, more officers died in traffic-related incidents.

Officer Isabel Nazario was killed instantly when a 16-year-old broadsided her police car on the passenger side. Her partner was critically injured. Her family wept as they etched her name on a piece of paper at the Memorial where more than 200 female police officers are remembered. Last year the number of female police officer deaths doubled from 6 in 2007 to 13 in 2008. It is one of the highest fatality figures amongst female officers in years.

The Philadelphia police officers arrived in buses and headed back the same afternoon after the ceremony. The National Law Enforcement Officers Memorial will continue to engrave the names of 254 others from around the country who died in previous years. All these names will be formally dedicated on the Memorial during the 21st Annual Candlelight Vigil on the evening of May 13th.

Meanwhile, the larger effort of recognizing the work done by policemen over the years is taking shape in the form of a permanent museum, right next to the memorial. It is likely to open in 2013.

This article and a slideshow are available on the WPVI-TV website.
Posted by Alaphia Zoyab at Thursday, April 30, 2009 0 comments

Why We Need Police Reform in India. Badly. 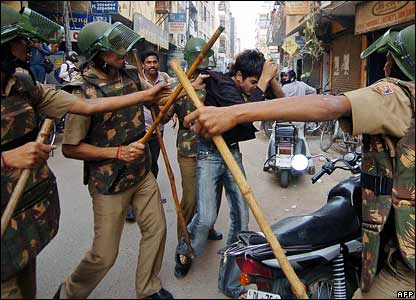 I argued all day. But in the end the assailant won.
He was a police officer.
In February 2006, my cameraman and I had been assaulted by a senior police officer and his henchmen (not policemen) while filming their brutality trying to put down a protest on an engineering college campus in Chennai.
In an irony of Indian bureaucracy, I had to plead with the same police officer to write a complaint against himself in his own police station!
Of course he didn’t.
Instead, I was given a useless piece of paper that said a Revenue Officer would investigate my claims because my allegation was against a Police Officer.
No action was taken. Nothing happened.
And that in fact is also the two-word summary of police reform in India.
Business leaders should join civil society groups to lobby the government to overhaul our police system. Thousands of Indians live below justice and a corrupt, ineffective police adversely affects us all. It affects the health of our democracy and also our economic growth.
Police reform is crucial in three main areas.
First, India’s basic police law needs to change. Commerce Minister Kamal Nath has triumphantly dedicated the 21st century to India. We seriously need to ask why then are we are still using 19th century laws?
The Indian Police Act in use today was written in 1861 by the British Empire whose primary use of the police was to protect their commercial interests against the rising tide of nationalism. Descendants of that Imperial Police, our policemen in 2009, continue to behave as though they need to tame the natives rather than maintain order for citizens.
Acting as a stooge of the ruling party, the Indian police is often brutish and insensitive, siding largely with the powerful rather than protecting the weak. After Independence, several states introduced their own laws governing the police but many of these laws are modeled after the 1861 law and some in fact are even worse, requiring little police accountability. That’s why India needs a new law structured around democratic policing and human rights. This imperial, 19th century law belongs in a history text book.
Second, policing needs to be depoliticized.
It would be unfair to lay the entire blame for the abysmal law and order situation on the Indian Police Service (IPS). The police is crippled in large part because of its bosses – the parliamentarians and legislators – many of whom are corrupt to the core. Any honest police officer who stands up to them is promptly transferred. The threat of transfers hangs over every policeman’s head and for officers with families, constant transfers takes a huge personal toll. Avoiding transfers in turn breeds a culture of conformity and corruption.
According to Transparency International’s 2005 report, the value of petty corruption in the police is estimated at Rs.3,899 crores (approximately 800 million dollars). The report also found that 80% of people who had contacted the police had paid a bribe. That percentage should set off alarm bells but there is absolutely no political will to change the status quo.
Politicians have resisted legislation to make the police more independent because it threatens their power directly. After Indira Gandhi’s infamous Emergency ended in 1977, the government set up a National Police Commission which made several important recommendations to shield the police from political interference. Over 30 years later, many of those recommendations are still in cold storage.
As governments come and go, police officers go through a merry-go-round of transfers. This practice has become so entrenched that there are reports of corrupt police officers in turn, bribing politicians for powerful positions. The whole thing stinks.
Third, the Indian police needs to be sensitized to human rights, gender rights and constitutional guarantees of equality. People constantly talk about how we need tough terror laws. I think, in fact, what we need is a kinder police. Statistics on police brutality quite naturally don’t reflect the scale of the problem. But there is plenty of anecdotal and video evidence to show that police officers at best stand by silently during mob attacks and at worst, participate in violence themselves.
In a rapidly changing rural landscape, the traditional forums of justice like the Panchayats (local village councils) are fast vanishing and the police are required to step in to solve disputes. But the police, with their own caste and communal baggage, act in partisan ways. In a milieu where people have a higher consciousness of their civic rights this creates further turmoil because traditional forums don’t always work and the police take sides further inflaming the problem.
Economic and social changes are placing a much heavier burden on the police and the threats of terrorism and insurgency are only too real. Of India’s 611 districts, 172 are said to face tribal and Maoist insurgencies and urban India is still recovering from the latest shock of the Mumbai attacks. Our police forces are hopelessly unprepared to meet the challenges of policing modern India.
After the Mumbai attacks many angry protesters carried posters saying they would not pay their taxes. Disengaging is unfortunately not the solution if we want a robust democracy and a stable political and economic climate. Indian business has a strong stake in this and should use its leverage in government to push for police reform.
For the business community, this is a great way to help India while helping itself.
This op-ed was published in a Kellogg School of Management publication, brought out during the 'India Business Conference.'
Posted by Alaphia Zoyab at Sunday, April 19, 2009 8 comments