Interview With Director of 'Afghanistan: On the Dollar Trail' 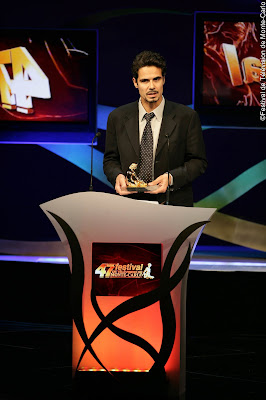 Paul Moreira in Monte Carlo in 2007 receiving an award for his documentary on Iraq - "Agony of a Nation".
Introduction:
680. That was the number that set investigative journalist Paul Moreira on the road to Kabul. At the 2008 Donors Conference in Paris, USAID made the claim that they had built 680 schools in Afghanistan. But it didn’t sound like the truth to Paul Moreira and he decided to check it out himself.
Moreira’s documentary, ‘Afghanistan: On the Dollar Trail’ is the result of his investigation into whether these schools were ever built. The film also contrasts the misery of ordinary Afghans, with the corrupt political class when Moreira stumbles upon the Walt Disney end of Kabul where people are building Cinderella-castle style homes.
Paul Moreira has built a career out of his investigative skills. In 1999 he launched an investigative show on Canal Plus TV and in 2006 he set up his own TV company - Premières Lignes based in Paris. His first investigative documentary about Iraq, ‘Agony of a Nation’, was awarded ‘Best Documentary’ at Festival International de Télévision de Monte-Carlo’ and ‘Best Investigative Documentary’ at Festival International du Grand Reportage d’Actualité.’
I interviewed him via email.
Q1. Why did you choose as the starting point of your film, the Donors Conference held in in 2008 where nearly 21 billion USD was pledged to rebuild ’s infrastructure and institutions? Did the claims made at the conference strike you as hollow?
I did not know exactly if I would use anything from the Donors conference in . But I still went with a camera, just in case... I knew I wanted to go to the root of why the insurgency was gaining such momentum and support among the population. I knew money was definitely an issue. I suspected there would be a lot of spin going on too. I was right. Beyond what I could imagine.
There were 300 journalists, all separated from the conference by a security apparatus and a wall. We were all following the conference on an internal TV network. Every one was there, agencies, TVs, papers... frustrated! No access. Then Hamid Karzai (Afghan President) and Bernard Kouchner (Foreign Minister of France) came out to announce a new injection of funds in the Aga Khan Hospital in Kabul (by the way, one of the only donor created institutions that works fine...). After the announcement, all the journalists were literally rushing towards Karzai, asking the question every one wanted to ask -Corruption, where is the money going? I remember Karzai was elbowing his way back to the other side of the wall. Due to the crowd of reporters around him he couldn’t and had to answer some of these questions before security guys reset a safety zone between him and the press.
Then there was the communication of USAID. The man responsible for was there, Mr Yates -  soft spoken, good manners, very friendly. I did an interview with him and the only figures he gave me were on the number of schools USAID had help build anew or refurbish: 680 schools. I just told him I would do a reality check on that. "Vous êtes le bienvenu" (“You’re welcome”), he answered in a perfect French. But I never saw him again and I couldn’t get him in front of a camera once on the field - Especially after I discovered the schools were not easy to find.
You can read the entire interview on the International Affairs Review website where it was published on 28th March 2010.
Posted by Alaphia Zoyab at Monday, March 29, 2010 0 comments

When Its Israel-Palestine – Everything is Political

A few days ago I attended a panel discussion at the London School of Economics on the Goldstone Report – a fact-finding mission established by the UN Human Rights Council to investigate the Gaza War.

I got to the Sheikh Zayed Theatre early and was squeezed behind a long table with people on all sides. The event was obviously so keenly awaited that LSE wasn’t giving anyone the luxury of spreading out wherever they liked. It was a packed house.

Interestingly, this meant that people on opposite ends of the political spectrum were sitting uncomfortably close to each other. And engaging though the panelists’ speeches were the responses from different corners of the audience were equally interesting.

The speakers included Professor Christine Chinkin who was part of the mission headed by Judge Richard Goldstone and Colonel Desmond Travers, retired from the Irish Armed Forces and also part of the mission. The Israeli side was represented by Ami Ayalon – former head of the Shin Bet, Israel’s Secret Service, former commander-in-chief of the Navy and former member of the Knesset. Ayalon incidentally, faced the threat of arrest under universal jurisdiction if pro-Palestinian groups had sought an arrest warrant. Representing the Palestinian view-point was Karma Nabulsi – a lecturer at Oxford University and Director of Civitas– a project that establishes civic structures for Palestinian refugees and exile communities. It was moderated by Lakhdar Brahimi, veteran UN envoy and advisor.

My aim is not to give you a full account of who said what but to tell you something about the attitudes in the room and how this conflict from thousands of miles away can enter a room anywhere and poison the air.

However, to explain this, I have to tell you about the fabulously hypocritical assertions made by Ami Ayalon. He began with the solemn assertion that ‘War is horrible. If we don’t understand it, we understand nothing. There is no ideal war.’ He made it clear that he had been against Operation Cast Lead in Gaza.

With that opening he switched to the subject of the Goldstone report. Rather, having accepted the invitation to a panel called specifically to discuss this report, he arrogantly asserted that in fact, he didn’t want to talk about it. He said, “We have to take a decision in this room – discuss Goldstone or discuss peace. We can’t do both.” Huh?? Why not?

Mocking the work of people who use civil rights and international law in their arguments (all the other panellists), he dismissed them saying they used the language of “blame and guilt.” So, he said there was no need to talk about the report because he wanted to introduce a new dictionary, by using the language of “responsibility”. That’s what the Goldstone report does by the way. Places responsibility and on both sides.

But more insensitivity followed. He declared, “We should not look for justice. We have to look for fairness and honesty.” Difference please? Then he said that we can’t look at the past but “jump far ahead into the future and imagine peace.” What??? Wasn’t Israel created because it was in the very distant past a homeland of the Jews???

He then began his favourite chapter when he said he knew nothing about international law but he knew Hamas and Muslim fundamentalism and proceeded to tell the room how the Palestinian idea of victory was now reduced to seeing Jewish blood spilt on the streets.

It is no ones argument that Hamas is peace-loving. It has proved to be as ruthless in its use of Palestinians as human shields and suicide bombers. But. BUT, what is really depressing listening to men like Ayalon and seeing his supporters clap vigorously after his dumb speech is that they have taken the position of being blind to the ruthlessness, brutality, hypocrisy and racism of their own side. Question it and you’ll be accused of everything from naivety to anti-semitism and terrorism. None dare question the right of Israel to kill, maim, bomb, burn, destroy, block, steal, grab and annex.

But I digress. Returning to the politics of the room…. So while Ami Ayalon was banging on about all this, Karma Nabulsi initially responded with smirks, then allowed herself to laugh and occasionally shook her head in a way that suggested she was thinking, “Oh…. you cruel, cruel fool.”

Nabulsi came on and made an elegant speech about why we need international law and that Israel was clearly not achieving peace by force so it should try achieving it by obeying the law for a change. That international law is not international politics is a very hard argument to make anyway, and in front of that crowd, it was obviously met with much scoffing and skepticism.

Then during the Q and A, Ayalon rudely looked at his watch when Brahimi asked a long question. Nabulsi at one point bodily turned away from the whole panel because she found (I presume) Ayalon’s comments ludicrous. Then the moderator who was reading out written questions from the audience couldn’t pronounce one writer’s name correctly. She stumbled saying, “umm…I think it a kaidi…al-kader..” And someone in the audience laughed and said, “Al-Qaeda.” Would such an inappropriate “joke” about a Jewish name be accepted? Certainly not. But it was boldly and shamefully made by someone in the crowd. Also most of the written questions were pro-Israeli. Was it a smart strategy to crowd out negative discussion of Israel, I wondered?

At the end of the discussion a white woman with frizzy hair wearing a badge which said, “Free Palestine” stood up and started shouting at the top of her voice that Ami Ayalon had blood on his hands. I couldn’t catch what she said because she was outshouted by others in the room. One staunch Israeli supporter yelled, “Go get your head tonsured.”

I walked out with the skin on my face feeling hot. I reckon both sides left feeling more entrenched in their positions which unfortunately defeats the purpose of discussions. But such is the intractability of the Israel-Palestine conflict. You can’t even discuss it neutrally in a nice comfortable theatre thousands of miles away.
Posted by Alaphia Zoyab at Thursday, March 11, 2010 2 comments