"For weeks my kids did not talk, they were so scared."

(Photo Courtesy: AP)
Amnesty International interviewed a survivor of the conflict in Sri Lanka between the LTTE and the Sri Lankan government’s armed forces. Vasuki (name changed) gives us a brief snapshot of what it was like living in the war zone trying to stay alive with 2 small children.
“In December 2008 I was living in Kilinochchi when my home came under aerial attack. We were displaced to Viswamadhu in Mullaitivu. The early days of displacement were not too difficult as Viswamadhu is an agricultural area. It was when we moved to PTK that we started to feel the pinch. We lived in a tent over a bunker. When there was no attack or shelling we could cook outside but when shelling was heavy we had to stay in the bunker for hours cooking and living there. For weeks my kids did not talk, they were so scared. They had to witness people dying from shell attacks and the memory of dead bodies lying all around will probably never vanish.
In March we had to move to Matalan in Mullivaikkal – this was crammed with tens of thousands of people. By now people had finished their supplies and eaten all they had, even their cattle. I had to fast so that I could feed my children and just drank the water I cooked the rice in. Elderly people collapsed around us or slipped into comas. I have to admit I tried to kill myself because I was so depressed but my daughters begged me not to give up. What kept us going was a belief that the UN would intervene to stop the terrible human suffering.
Shelling got steadily worse. Then on 15 May a huge explosion forced us to move towards Vella Mullivaikkal. I can’t describe the horror around us - we had to fight our way across a carpet of dead bodies. We finally made our way to Vatavahal bridge. Along the way the Army fired at us.
I find it hard to talk about this time.... people were also not happy with the LTTE as they forcibly recruited from families. What I know is that people want to live in peace but we cannot forget all those we left behind. You can’t give us back what we lost but you can give us justice”.
If Vasuki’s story moves you please take action by signing a petition to call on the UN to open an independent investigation into war crimes committed by both sides.
Posted by Alaphia Zoyab at Monday, May 17, 2010 4 comments

In India we punish the victims of crime. Yeah, I know many countries punish the perpetrator but that approach assumes we don’t have a choice. Of course we do! Besides, its also easier to punish the victim because you often know who they are, unlike the more cumbersome approach of finding perpetrators. It is a waste of public resources.
Also, if victims weren’t so foolishly vulnerable, would people go about victimising them? The answer is a clear negative. For instance, if you didn’t ride a bicycle on the main road, you wouldn’t get run over by a bus. Or if you weren’t old and diabetic, you wouldn’t get overpowered by your burglars. Or if you weren’t a female, you wouldn’t get raped. Its all so obvious and yet people don’t get it! They continue to fall into all sorts of traps instead of just getting under the covers and staying there so that no harm may come to them.
Recently in Orissa, “boyfriends” were caught filming their girlfriends naked and selling the stuff on the market. One girl killed herself when she found her naked images on a CD. Now authorities in Orissa want to warn all girls against rushing into physical relationships. Combining moral science with law is such a superb idea.
But that’s not enough because there may be some rotten wenches who will still disobey despite knowing these dangers. So just to make doubly sure that this campaign is successful, the Orissa State Women’s Commission chairperson, a free thinker by the name of Jyoti Panigrahi, has told parents to ‘monitor the movements of their daughters and keep an eye on their activities.’ It’s a good suggestion but doesn’t go far enough. Locking women up would be so much easier. But sometimes it is hard to make such suggestions without avoiding charges of sexism.
Some lawyers in Kamakshanagar have held a protest rally demanding the immediate arrest of the “boyfriends” involved. This is outrageous. Now every man in Cuttack will be looked at suspiciously. How will the police prove that the guys were in a relationship? Are the police supposed to drop VIP duty to chase after boys in the street now? Is this what its come to? Mad.
Posted by Alaphia Zoyab at Friday, May 14, 2010 9 comments

May 18th, marks the first anniversary of the end of the war in when the government concluded its campaign against the Liberation Tigers of Tamil Eelam (LTTE).
The LTTE’s dreaded leader V. Prabhakaran is dead, as are all his senior colleagues and for now the banned terrorist group has been destroyed.
But there needs to be a serious and independent investigation into the war crimes said to be committed by both sides during the final months of the war between January and May 2009. The SL government estimates that about 3,000 to 5,000 civilians were killed but unofficial estimates by UN personnel present in SL during that time say that the real figure could be closer to 20,000 if not more.
I know some people argue that war is dirty business; that you can’t have a war where everyone comes out smelling of roses. True. But there are rules even for the conduct of war and if the Sri Lankan government has observed those rules, it should not be afraid of an independent investigation. But it won’t allow one. And countries like , and are helping it cover up its crimes.
Even the manner in which the Sri Lankan government has handled the post-conflict situation and the terrible, terrible punishment that the Tamils are being made to pay for this collectively is shameful.
Amnesty International put together this list of ‘Top 10 Things to Know’ about the post-conflict situation in . The next time you hear the argument, “But war is dirty business…..” remember to quote one of these 10 points.
Posted by Alaphia Zoyab at Monday, May 10, 2010 2 comments

Britons Well-Read, Even When Not Well-Fed

Bill Bryson writes in ‘Notes From A Small Island’ that the average person in Great Britain is very well-read. Visitors to London also notice that Londoners will board the tube and routinely pull out a book or atleast a newspaper. You could do a little naked jig in your coach for a full 30 seconds but people may not have noticed, absorbed as they are in ‘The Moonstone’ or ‘The Time Traveler’s Wife’ or whatever.
I thought of all this when my husband alerted me to a homeless person sitting on the pavement of the very posh King’s Road in Chelsea, totally engrossed in a book. My caption for the photograph below would be, "Britons well-read, even when not well-fed." 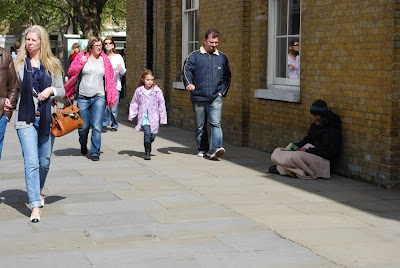