SNAPSHOTS OF A CHICAGO SUMMER 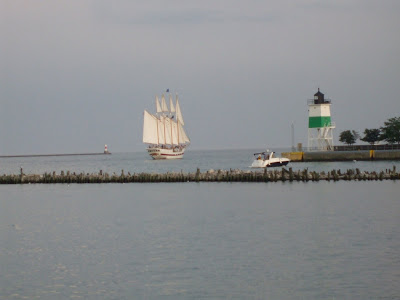 A view of Lake Michigan from Navy Pier. 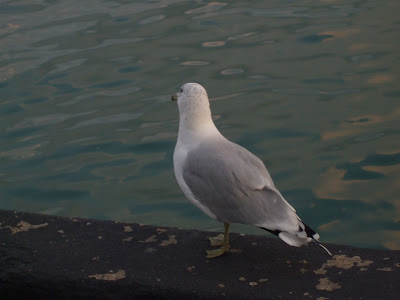 Navy Pier's other two-legged visitors. The seagulls get nice and close. 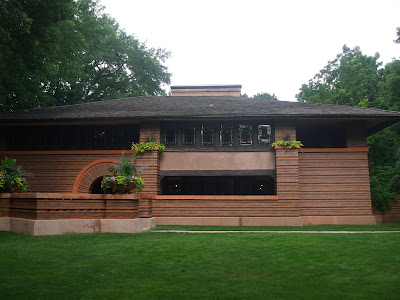 Chicago is a great city for anyone interested in architecture. This is one of Frank Lloyd Wright's creations in the historic Oak Park area. Of the many beautiful homes in the neighbourhood, this one is my favourite. 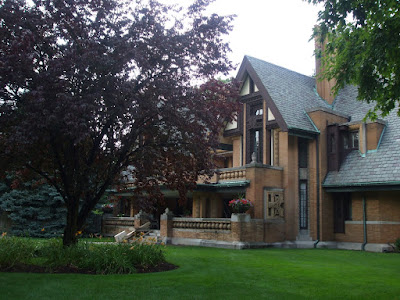 Another Frank Lloyd Wright creation. His designs are versatile and this one is influenced by the Tudor style. 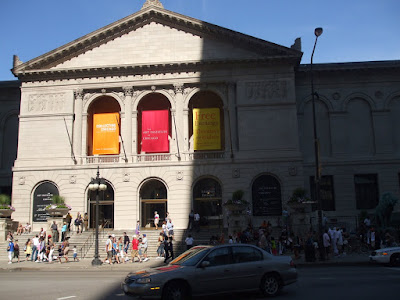 The Art Institute of Chicago, famous for its huge collection of Impressionist art. 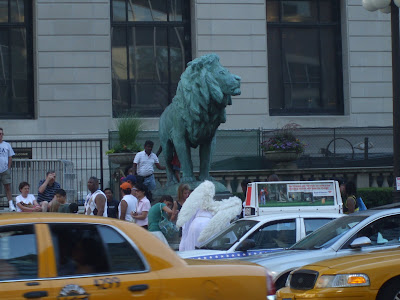 The Lions outside the Art Institute have stood there for over 114 years. Made of bronze, they were installed in 1894 after Edward Kemeys exhibited the plaster model the previous year at the World's Columbian Exposition held in Chicago. 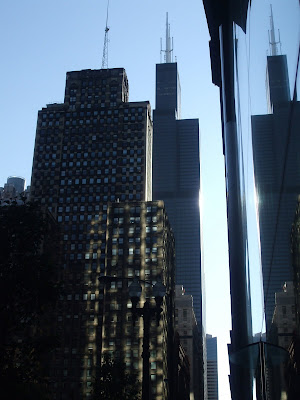 Sears Towers (behind the first brown building). It was the world's tallest building between 1974 and 1998. It's structural engineer was Fazlur Rahman Khan, a Bengali American, widely regarded as the "Einstein of structural engineering". 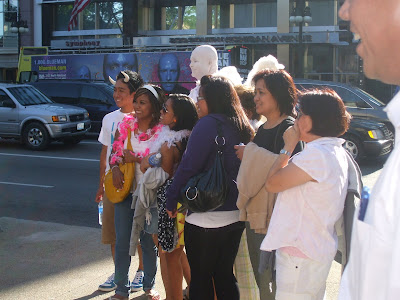 Plenty of strange encounters and photo-ops on Michigan Avenue. 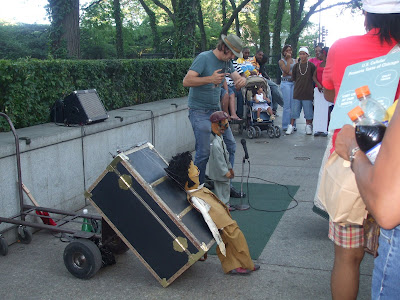 A puppeteer outside the Art Institute of Chicago. His puppets are old, shabby and torn but he does a pretty neat job getting them to sing some blues. 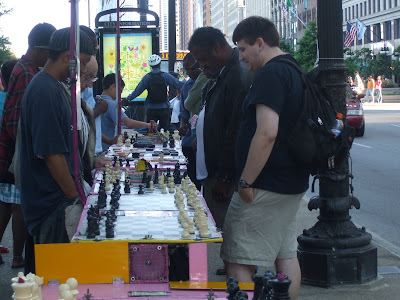 Stop here, make the right move and walk on. An ongoing game of chess on the sidewalk on Michigan Avenue. It is a great place to wander aimlessly. 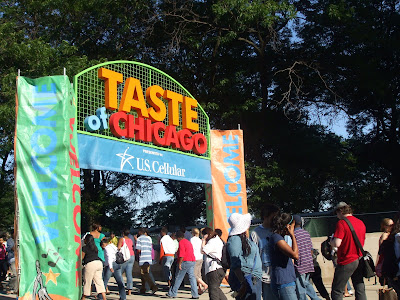 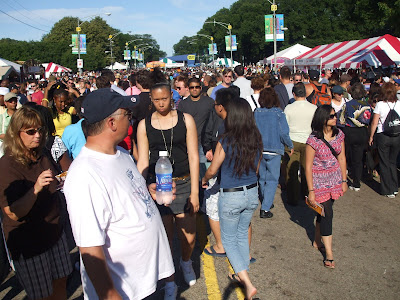 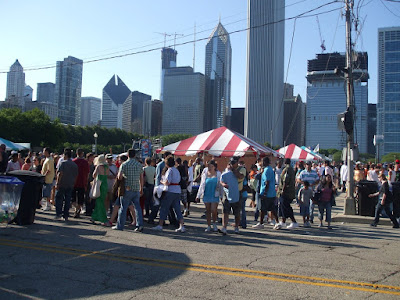 The 'Taste of Chicago' food festival is largely a waste of time. The food is lousy, people with greasy hands are jostling for space and everything is over-priced. Besides, how much can you eat? Actually, I take that back. Even if you can eat up a storm, the 'Taste of Chicago' is skip-worthy. You won't miss a thing. 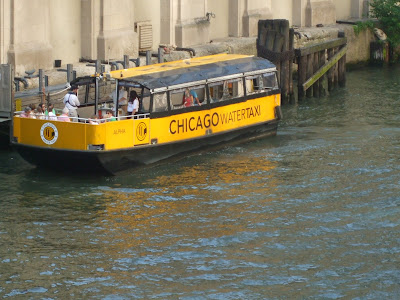 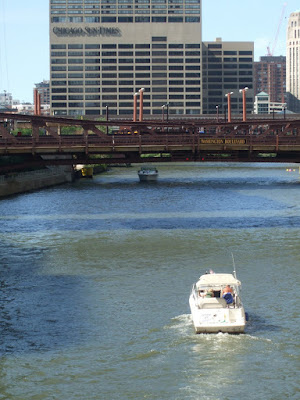 The Chicago River flows through downtown Chicago and originally emptied into Lake Michigan. Since this ended up polluting the waters of the Lake it's flow was directed towards the Mississippi River Basin. Just follow the river to look at some of Chicago's fabulous buildings. 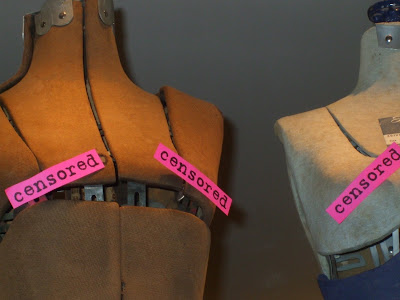 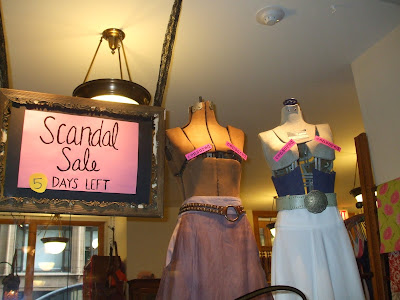 I found this store inside a building in Wicker Park. I didn't have the time to go in so, sorry, I can't tell you what exactly the 'Scandal Sale' was all about. Besides, part of it was censored. 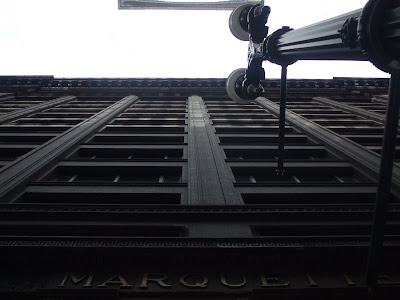 The ornate Marquette Building inside the 'Loop' in downtown Chicago. The original colour of the building was more red but years of soot and dust have blackened the exterior considerably. This early steel frame skyscraper was completed in 1895 and was named a 'National Historic Landmark' in 1976. Step into its lobby to see some shimmering mosaics and sculptures. This is just one of Chicago's many splendid buildings. 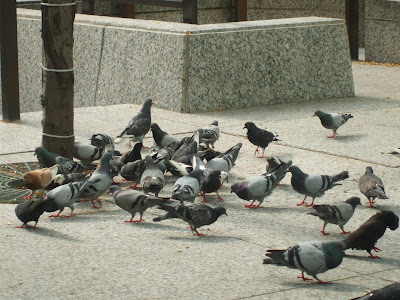 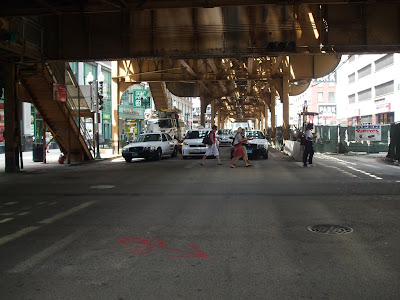 Part of the 'El' tracks that form the 'Loop'. Ring a bell from Gotham City in 'The Dark Knight'? 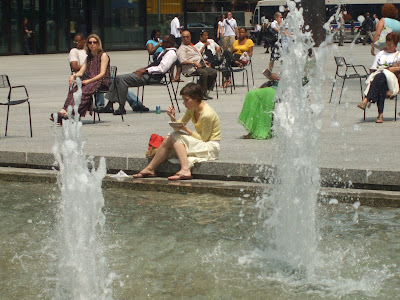 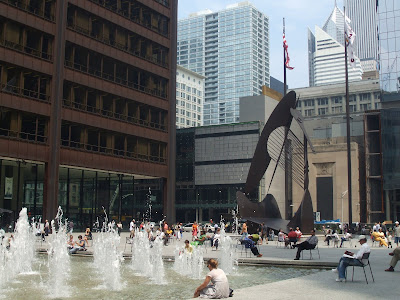 The open area in front of Daley Plaza attracts all kinds of Chicagoans. There are people doing intense reading, some talk loudly on cell-phones, some eat lunch, men in suits take a break from work and children slide down the strange looking sculpture in the background. The piece of public art in the picture is an untitled sculpture designed by Pablo Picasso. It was the first major public art work in downtown Chicago and is today a major landmark.
Posted by Alaphia Zoyab at Thursday, August 28, 2008 13 comments