HOW TO MAKE BACON

Don't think me macabre for taking pictures of pigs being slaughtered. I just happened to be there. The process was fascinating and I must admit I'm not really big on animal rights. The eyes don't moisten. So anyway, here it is - a photo essay. And if you care about pigs and other four-legged friends of man, skip this one. 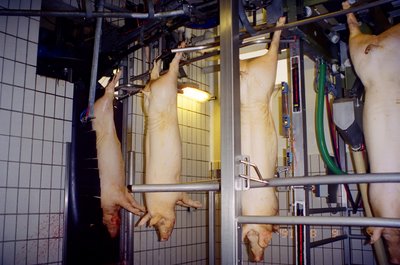 These pictures were taken at the Danish Crown factory in Grindsted, Denmark. The plant was shutting down because it was too small and it was no longer viable to run it. The pigs are gassed in a chamber just ahead of this one. Here they enter the assembly line where man and machine go to work to remove the innards. This is how it ends up as bacon and ham at the breakfast table. 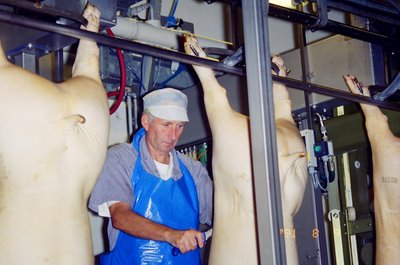 A worker makes the first cut. 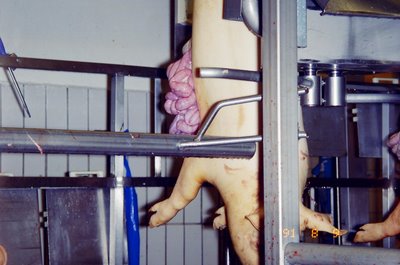 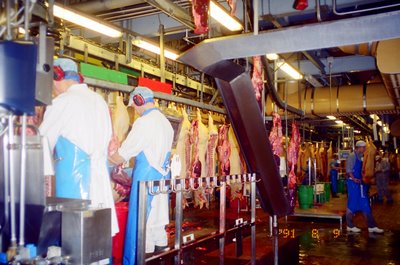 There are quite a few stages and each worker or machine yanks out a specific part from inside the pig. Theres blood all over the floor and thats not the scary part. Instead, its the knives in the workers hands. I kept thinking, what if one of them went berserk one morning? (Like that morning.) But workers in Denmark are not frustrated. More on that later. 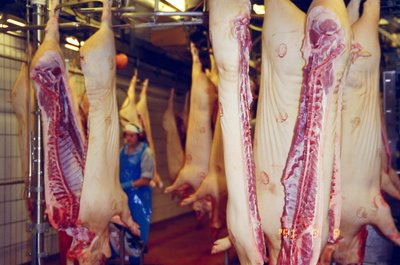 This is pretty much the last stage of the inside-clearing job. As you can see, theres almost nothing there! 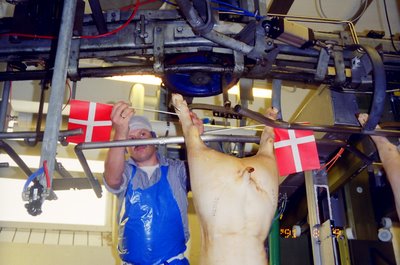 Now, the Danes love using their flag. Everyone has a flagpole in their lawn and if its someones birthday the flag goes up. Little flags even go into the birthday cake and all over stores in Denmark you will find all kinds of everyday things with the flags design, like, notebooks, pens, pencils, postcards and of course flags. So it was only appropriate that the last pig that came out of the assembly line went through proudly with the Danish flag in it. 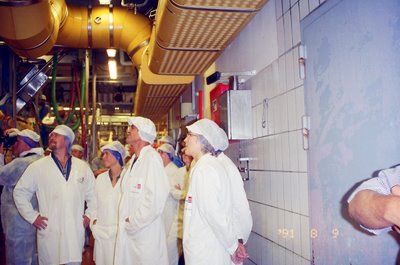 It was an emotional day for the employees at Danish Crown in Grindsted. They had worked side by side for many years and as the last pig rolled out a wave of nostalgia swept over them. But everyone was still smiling. Unemployment is so low in Denmark (about 3%) that only a minority of the nearly 700 workers here had not yet found another job.

wow...this is such a brilliantly done piece. Poor pigs though.

Hi Rajesh!
Thanks! Nice to see your comment. Yes... not very pleasant for the pigs.

Anand - Thats how your favourite meat comes to your table. But the people I was with that day are also big pork eaters and I can assure you they didn't feel like eating the stuff after watching that gore-fest.

Alaphia, Anand,
Thats not exactly how from Indian abattoirs pig meat arrives at one's table. And considering the unhygienic conditions here, IMO it is best to avoid Indian pig meat.

Oh yes... quite right RS. I wouldn't touch it frankly. Indeed I'm sure I'd turn vegan if i went to an Indian slaughter house.

Alaphia,
Good you resorted to publish the "gory chopping" photos of the useless Swine and become unheard.I was wondering whether you ever had the guts and the nerve to publish the photos of the beef industry of Denmark like this.
I bet you would have been sued by Maneka Gandhi on Animal Rights abuse or you would have been dragged into a political mess by the BJP on blogging on the Holy Cow.

You cleverly played it safe. Right!!!Hope you had a smooth landing at the Chennai Airport.

Hello Alaphia,
Being a vegetarian,I cannot appreciate it.Nevertheless,good camera work,I must say.And good to see you on air after a long break.Why has the Chennai studio turned conventional with a studio background?The earlier backdrop of the beach was nice.

Hi, are you back from Denmark? Wanted to speak to you for a story I am doing for Reuters on blogging. Let me know. Tony (toeknee@gmail.com)

Hi Sathej,
You liked the beach background? I think we're going to mix them around... one background can get boring.

Hello,
Yes,the beach background was nice.And changing the background sounds good too.What happened to Southern Edition?And maybe,you could try hosting a show for Chennai on the lines of Fight for Delhi.Chennai is not so clean either.
The December Music season is about to start here.NDTV could consider having a show on that too.It is a fairly big event,as you are probably aware.
Best wishes,
Sathej