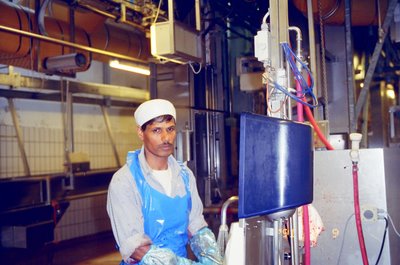 There were nearly 30 foreigners working at the Danish Crown plant in Grindsted. Many from Vietnam and a few from Sri Lanka – like Kandiah Kankanidhi (in picture). Kandiah is from Achchiveli in Jaffna and he fled the war in Sri Lanka in 1985. He landed in Tamil Nadu and lived in Purusuwalkam briefly before seeking asylum in Denmark. He lives in Grindsted with his wife and two boys aged 4 and 10. He still has two brothers back in Achchiveli and is able to send a considerable sum of money back home. He was making nearly 170 Kr. per hour, which is around 1360 Indian rupees. (People work 35 hours a week in Denmark.)

Kandiah is satisfied with his life but dreams of going back home. “I want to go back some day. I want the future generations of my family to remember Tamil. If we get freedom, I will definitely go back.”

I felt sorry for Kandiah - thousands of miles away from his homeland, holding onto the pipedream of a free Eelam.

Kandiah won't have a problem finding another job. Sri Lankan workers are generally valued for their hard work. Besides, Denmark, with a population of around 5.5 million could do with as many hands as possible.
Posted by Alaphia Zoyab at Monday, November 13, 2006

kandiah's 'pipedream' as you and i may term it, is something that fuels the fire - the fire to see eelam happen -in millions of expat tamils worldwide - esp in europe.

something that never gets into the radar - or blissfully chosen to ignore - is that the ltte wud have been a long ceased to exist as it is now but for the huge foreign funding they get through. while the world at large has been obsessed with the islamist-jehad funding - the likes of ltte have driven their private agenda in a ruthless manner - destryong a generation or more of innocent lives in the process.

i've been here in colombo for over a year, and seeing things so closely - am afraid I have become cynical enough to believe that there is'nt a practical solution in sight for this country's vexed issues.

but then as it always is - one man's pipedream - is anothers roaring ambition!

Alaphia Zoyab said...
This comment has been removed by a blog administrator.
Saturday, November 18, 2006