Book Review: Guests of the Sheik 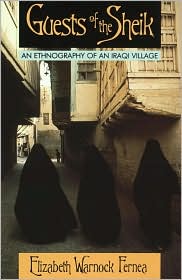 On a dark rainy night in January, Robert Fernea broke open the padlock to a little mud home in El-Nahra, to introduce his bride to their new home. Birds chirped overhead from the thatched ceiling and the room was littered with books, papers, clothes, blankets and dishes. The year was 1956 and Elizabeth Fernea struggling to carry her luggage and keep her black cloak on (abayah) entered the threshold of her new life in Iraq. And here begins her book, ‘Guests of the Sheikh, An Ethnography of an Iraqi Village’.
For readers weary of the post-invasion American gaze on Iraq, this is a refreshing piece of work, written in 1965. Written with sincere humility and respect, it tells us of the lives and concerns of the people of this tiny village in southern Iraq where so much happens even if it appears stuck in a time warp.
Elizabeth accompanies her husband Bob, (known to the villagers as Mr. Bob) on his doctoral research studies in the village. Both diligently follow the rules of society to avoid becoming a hindrance in their own work of observation. They are the guests of the local Sheikh Haji Hamid and live in his guest house for almost two years, recording the lives of the tribal inhabitants of the village.
The discomfort of a little mud house in the middle of a conservative and traditional Iraqi village are all initially bewildering for Elizabeth – brought up in Canada and Portland, Oregon. But as she dedicates herself to the rule book that includes gender segregation and veiling and allows herself to be swept up in the lives of the local women, she starts to form bonds and eventually deep friendships.
This is not a long litany of a western woman’s woes in the midst of such a different society. Fernea writes with a warm and matter-of-fact tone, placing everything in the local context - ranging from the longing for boy babies to the curse of being unmarried.
Her education and western freedoms hardly make her the object of envy in El-Nahra. On the other hand she is pitied. She has no gold, lives far away from her mother, has no children and cannot even cook rice! The initial weeks and months are full of trepidation and emotional lows as she enters the world of the village women all by herself - a world full of playful and often seemingly cruel teasing.
But Fernea makes her way, slowly but surely into this world and in fact her finest touch is in the way she makes each of these heavily veiled village women – Laila, Sherifa, Selma, Aziza and several others, emerge as colourful characters. These women take Fernea under their wing, protecting her from Mr. Bob’s imaginary beatings (as they expect any normal Iraqi husband to do) teaching her how to cook rice and even keeping her away from the company of strange men (American friends who Fernea longs to share a beer with!).
The book brings alive the daily rhythms of this little Iraqi village going through the full annual cycle of highlights – Ramadan, Eid, Ashura (this is a Shia village), the pilgrimage to the holy city of Karbala, the harvests and the feasts. The reader is drawn into the womens inner gossip circle about who is to marry whom, who is pregnant and who will be the new school teacher.
The main preoccupation seems to be the impact of the salinity of the land. The Iraqi nationalism of the 1950s does not seem to touch the village except for the few central government employees such as the young irrigation officer – Jabbar who believes in the communist revolution and the young school teacher Aziza who desperately wants to learn English and goes unveiled when she is in Baghdad.
For the others, life is largely still about the old rules of tribal fealty and family honour although here too attitudes towards women’s education are changing. The young Basima is being sent to school in Diwaniya and the fact that she will live in a house with unmarried men invites a few sharp comments from the Sheikh’s wife Selma.
Fernea’s descriptive power is strong and the fact that she refrains from throwing in her own judgments every few paragraphs makes her work uncluttered and enjoyable to read.
She and her husband left Iraq in 1958, the year Abd al-Karim Qasim became Prime Minister overthrowing the monarchy. The revolution had come to Iraq although everything was soon to go horribly wrong under the Baathists and Shia society would experience a long period of repression.
Fernea died last year at the age of 81, after a long and productive career as professor of comparative literature and middle east studies at the University of Texas.
Her work is that much more valuable as it captures the beauty of a small Mesopotamian village ahead of its darkest days.

Good one: the opening of the book is quite a "drawing" one and sets up I reckon for a profound and interesting read!

Srini,
Yes, I found myself going back to the book at every free moment. Its a very engaging read even though its just about everyday events in the lives of the tribal folk.