How Not To Conduct a Press Conference 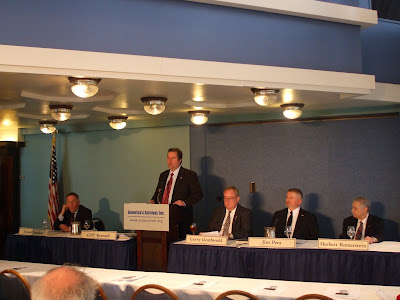 Cliff Kincaid speaking at the National Press Club at a press conference held by 'The Campaign for Justice for Victims of Weather Underground'. 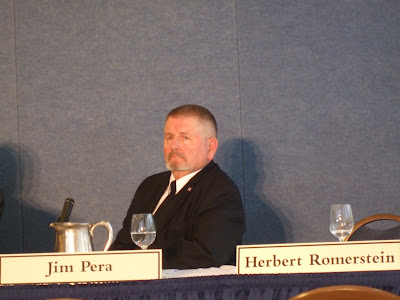 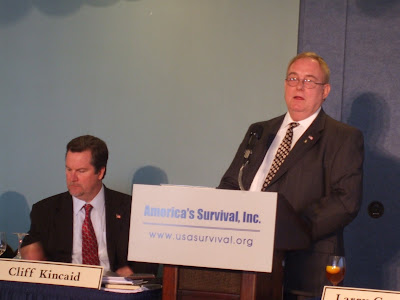 Larry Grathwohl who said he infiltrated the Weather Underground while working for the FBI.

On March 12th, the ‘Campaign for Justice for Victims of Weather Underground Terrorism’ held a press conference at the National Press Club in DC. It was held, in hindsight rather inappropriately, at the First Amendment Lounge. Part of the conference was used to rant against Rupert Murdoch’s publishing company Harper Collins for promoting former Weatherman, Mark Ruud’s book. Cliff Kincaid, journalist and editor of Accuracy in Media (AIM) demanded, “Kill this book, a despicable terrorist memoir.” (He later clarified that he didn’t want the book banned, he just wanted Harper Collins to drop it.)

The group called the conference to highlight their call for justice for Sgt. Brian V. McDonnell who was killed in 1970 when a bomb went off at the Golden Gate Park Police Station in San Francisco. They want the Justice Department to redouble efforts in helping solve the case by providing all evidence it has. Furthermore, one of the speakers, Larry Grathwohl, a former FBI agent who infiltrated the Weather Underground claims Bill Ayers, the group’s founder told him that his wife Bernadine Dohrne planted the bomb at the police station.

The group wants Ayers and Dohrne to testify under oath before a grand jury if they really are innocent as Bill Ayers has claimed in media interviews.
All perfectly reasonable so far.

But heres why this post is titled 'How not to Conduct a Press Conference'.

Things started to sound really strange when words such as ‘Marxism’ and ‘Communism’ were bandied about as though it was the height of the Cold war and Sputnik had just been lobbed into the outer atmosphere. The speakers' clocks seemed to be set to 1959 instead of the current year.

At the end of the five speeches after everyone had collectively dreamed up the insidious phantasm of radical leftist ideas raging wildly across college campuses, it was time for q and a with the media, even the gangrenous liberal one.

The first question came from an African-American reporter from Free Speech Radio. The reporter’s long-winded question was about why none of the speakers had addressed the question of police brutality and the tumultuous backdrop of the 1970s. He was silenced rudely by Cliff Kincaid and another speaker, James Pera, a retired police officer who accused the reporter, of being an “ignoramus who only reads books” and listens to radical preachers, among other things. Then they accused him of rationalizing violence and terrorism and finally threatened to call security. The reporter shot back saying, “I’ll leave on my own. Would you like me to?” Kincaid replied, “I want you to be quiet and let us talk.”

Moral of the story is this: There are some basic mistakes that should be avoided to ensure that you will be taken seriously by the media. Or anybody. Do not threaten to throw out reporters from the room because you don’t like their questions. Do not provide information 20 years late (such as the threat of Communism) and if you can help it, do not use the words “ignoramus” and “books” in the same sentence.

Hey Dummy don't be blinded by your left wing ignorance. The Afro- American so-called journalist was a mouthy talking piece for the Radical Left. He got put in his place properly like you would, because the Afro american so-called journalist had no fact, just left wing "Poppy Cock". Maybe you should realize that these men are trying to find justice for a murdered Policeman. Tell the Fool, Afro- American so-called Journalist that said that all cops were murderers, to get informed. Then maybe he won't get Punked out at the next event he trys to crash...as for you, learn the truth before writing a left wing bias yarn about true American Heroes..The event was a success and Ayers and Dohrn will face justice...You don't like it....then deal with it.

Oh nice comment.Definetly we deal with it.
Work From Home