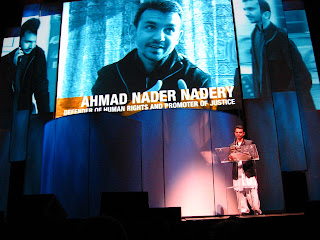 Violence begets violence and Afghans know that better than anyone else. One whole generation has seen nothing but guns and war where the sight of a Kalashnikov is as common as that of a kite.

In that generation, just four years before the Soviet invasion in 1979, was born Ahmad Nader Nadery. Despite the lawless, “failed state” that Afghanistan has become through his lifetime, he has soldiered on in his mission to protect human rights. And that’s why he was recognized this year as a “Young Global Leader” by the World Economic Forum for his role as commissioner of the Afghanistan Independent Human Rights Commission (AIHRC).

Addressing human rights in a war zone sounds like an overwhelming task. And it is. Where does it begin? And is it a tiny clean drop in a surging dirty ocean of violations? What good has the U.S. invasion done - people are still dying and an insurgency rages in the south? But just as the mind starts to boggle at these questions, Nader presents a simple analysis to the outsider. “The fact that we are even talking about human rights today is a huge step forward,” he says. And as beginnings go, that is a good one.

Nadery’s ambition for a peaceful Afghanistan was sparked off during his days at the Kabul University where he studied law. “Students represent every section of society and Afghans trust them. So I thought that students should take over the role of maintaining security as the different militias and warlords fight.” He and a friend presented this idea to the UN’s special envoy in Pakistan. It didn’t work. The UN didn’t want to sponsor another armed group. Having tried and failed Nadery went back to Afghanistan to finish his law degree. But by then he had made a staunch enemy in the Taliban for being a meddlesome troublemaker who had the audacity to challenge them. He says, “I was jailed, beaten and tortured for three months by the Taliban but my family managed to bail me out. It was 1999 and I couldn’t go back to Kabul. My siblings had all left for Europe so I decided to join my parents in Pakistan.”

But Peshawar, far from feeling safe, only felt lonely and depressing. The future looked bleak and Nadery remembers that time as a metaphor. There was booming construction in Peshawar with the arrival of Afghan refugees. But back home in Kabul, there was only destruction. Peshawar was being built while Kabul was being destroyed. He couldn’t bear to sit there and do nothing. So while many Afghans were resigned to their fate, waiting for money from relatives abroad and waiting for peace, Nadery decided to do something crazy.

He decided to journey through dangerous Taliban controlled Afghanistan to ask people what they wanted and record their problems – a first step in deciding the future course of the country. He and a friend traveled from Nimroz in the south near the Iranian border ending their journey two months later in Jalalabad between Kabul and the Khyber Pass. They met two other friends to discuss what they had seen and heard from ordinary Afghans about the conflicts and their problems. “We discovered that there was a major ‘legitimacy of power’ crisis. People didn’t trust the government at all because there had been no democratic process after 1978 to legitimize power.” The Taliban had successfully turned Afghanistan into a dark, barren, lawless corner of the world where learning and freedom were completely wiped out. Nadery recalls, “You couldn’t tell whether you were looking at an old man or a young one.” The thick beards and the depression made everyone look old and sad. “There was not a single woman on the street. The Taliban were hated by ordinary people not just for their violence and barbaric forms of justice but also because they abused elders – a grave violation of Afghan culture. But even through this there was a narrow window of hope and I started working for the International Human Rights Law Group gathering information on human rights abuses.” Despite these efforts, under the Taliban the total state of suppression continued.

“So when 9/11 happened and the U.S bombing in Afghanistan began a month later ordinary Afghans welcomed foreign troops,” he says. He himself felt a new surge of hope. The Taliban would be gone and the aspirations of 32 million Afghans would finally be realized.

Nadery became a prominent voice when President Hamid Karzai appointed him the Human Rights Commissioner in the AIHRC in 2002. But six years on Nadery’s job is as tough as it was when he began. “Reconstruction efforts didn’t create job opportunities and people were frustrated.” The Taliban tapped into these frustrations and made their comeback. Renewed pledges on security, rule of law and human rights in London in 2006 have also largely remained unfulfilled. “The Afghan national Army has the confidence of the people but the police are a source of fear and insecurity,” says Nadery. Meanwhile the Taliban has evolved. “They use the media in a very sophisticated way and try to dominate public opinion. They’ve learnt a lot from Iraq, especially suicide bombing.”

The biggest violation of rights is evident in civilian casualties something for which the international forces are equally culpable. Nadery says, “More than 8000 civilians have been killed in the last two years during operations, air-strikes and Taliban suicide bombings. The international forces shoot indiscriminately and torture and abuse detainees.”

Today in Afghanistan the metaphor of his Peshawar experience is evident. Where reconstruction has failed the Taliban is strong or as Nadery says, “Where the road ends the Taliban begins.” Ahmad Nader Nadery is a “Young Global Leader” because he is steadfast in his commitment to push them back.
Published in The Hindu BusinessLine on May 23rd 2008.
Posted by Alaphia Zoyab at Friday, May 23, 2008

grit and determination can make a man achieve the impossible. nice piece..

Are you by any chance the same Alaphia who wrote this daring, think-out-of-the-box piece on NDTV.com?

I liked that piece. Indians these days tend to be overly nationalistic, as you noted, and based on my own experience, you must have received plenty of emails/comments accusing you of being unpatriotic and so on. Given this, it's admirable that you are so outspoken. Keep it up! :)

By the way, what are you getting your Masters in? What do you see yourself doing after you graduate? I'm asking this because I'm considering getting a degree in something similar.

Very nice, highlighting a young person's single-mindedness. And happy that it was published in The Hindu Business Line.

Bhuvanesh, I prefer to answer your questions on email if you don't mind. Thanks.

Sure! I don't know your email address, so here's mine:
lalu_bhatt@yahoo.com