ROLE OF CASTE IN CONTEMPORARY POLITICS 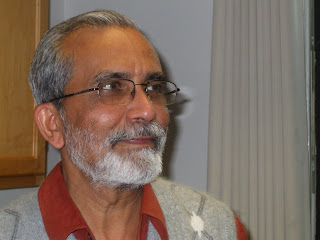 “A process has begun where caste might be losing its salience in Indian politics.” This was the core argument that Professor Suhas Palshikar made to a small group of research scholars and professors on South Asia at the University of Chicago.

He was invited to speak on the complex subject of ‘Making sense of caste-politics interaction in contemporary India’ and he did it crisply; gently hand-holding his audience for an hour through the different elements he wove into his talk. It was a well-distilled laying out, of all the things we actually don’t know about the great churning going on in Indian politics of 2008.

Professor Palshikar is also the co-director of Lokniti – a comparative democracy programme of the Centre for the Study of Developing Societies in New Delhi. The programme’s greatest contribution to political science has been their study of Indian elections since 1995-96. Believe it or not, between 1971 and 1996 there is hardly any data available to thrown light on social changes.

That’s perhaps why he says that the wrong questions are being asked by Indian political scientists. For instance, he says, “There are changes taking place in the experiential nature of caste due to urbanization.” He also draws attention to the changing Dalit image of the Bahujan Samaj Party (BSP). He points out, “The BSP these days talks about being a ‘sarvojan samaj’ party, which means a party for the whole society. They are no longer a party just for Dalits.” Professor Palshikar presented these ideas to underscore the as yet unexplored question, “Is caste influencing politics today in the traditional manner that it did in the 1960s and 70s?”

A rattling door that refused to shut tight didn’t seem to distract his audience. He held their interest throughout; making a point-by-point progression with pre-emptive clarifications to questions that might’ve popped up in the listener’s mind. Explaining why caste alone can’t be the framework within which Indian politics can be examined, he cites a small study conducted in his home base of Pune. He says, “Out study found that barring Dalits, in no other caste group are more than 40% practicing the same occupation as their father or grandfather.” He cites that as an extremely important statistic because it indicates that “the internal material interests of caste groups may be disintegrating” since the majority have experienced some form of upward mobility. The caveat he adds quickly is that this is true of Pune and could be different elsewhere which in turn shows how valuable a worms-eye view can be. “There has been an over-emphasis on creating macro-level data when what we might really need is constituency level information which we don’t have at the moment.”

In his analysis, political parties with national aspirations have had to evolve from appealing only to caste-identities because the politics of reservations and social justice eventually reach a dead-end. He says, “Now we are witnessing that caste-appeal becomes inadequate,” an assertion that is of a piece with BSP leader and Prime Ministerial aspirant Mayawati’s new inclusive “sarvojan samaj” message. He substantiates his claim by saying, “That’s why Mulayam Singh Yadav of the Samajwadi Party who appealed strongly to the Yadav community in Uttar Pradesh could not make much headway in Maharashtra because there are no Yadavs there. That’s why it is complicated for the two national parties, the Congress and Bharatiya Janata Party, to come up with any uniform caste-based strategy.”

But even as the national stage requires the de-emphasis of caste, Professor Palshikar points to a curious trend of the caste identity becoming more accentuated in cultural life with the formation of caste-based associations. He says, “Apart from acting as pressure groups demanding seats and reservations for their communities, they also act as gate-keepers, ensuring that young people marry within the community. Furthermore, they are demanding greater cultural space for their caste by demanding statues and renaming of libraries etc. after their caste heroes.” And interestingly enough they also perform some economic functions like a caste-based barbers association which fixes the amount that they will charge customers!

Overlaying the occupational and social changes taking place within Indian society and inside caste groups with the evolution of political parties themselves Professor Palshikar left his audience with a set of questions to frame their enquiry on Indian politics. “To what extent will caste be an effective unit of mobilization? And to what extent does caste constitute a unit that actually defines the interests of various groups in society?”

He says, “Region, religion, caste, material interests inter-weave in such a complex manner and at such different levels that we need to find out then where the contemporary moment in Indian politics lies?”

Rochana Majumdar, an associate professor at the University of Chicago and a historian says, “Palshikar offered new materials on the everyday operation of caste in contemporary India which opened up a whole new set of questions for researchers of Indian history, politics and anthropology.”

Unfortunately, scientific polling data on elections started only as late as 1996 leaving a bit of a gaping hole for researchers. What is clear though is that the notion that Indian politics begins and ends with caste needs to be discarded immediately.
Published in India Abroad in the May 30th, 2008 issue as well as on Rediff.com
Posted by Alaphia Zoyab at Saturday, May 31, 2008

i am not a research scholars nor a professors. As far as my understanding of Indian politics goes caste is and will remain salience in Indian politics.
Congress is actively playing the caste based politics in India, the resent OBC reservation is one such move aimed at getting OBC votes.
BSP may be talks about being a ‘sarvojan samaj’ party, but when it comes to election it also plays the same tried and test card of caste based politics.

All political parties have tried some or other form of divisions...BJP with religion, Congress with caste and most regional parties go with regionalism.

The political parties then find it easy to register a chunk of vote. Now all MBC will vote for Congress.

It is important that all newspapers / news channels make it known to the common people that it is only political gimmick.

Sir, definitely caste is playing a very important role in the politics of India. Each and every political party are trying to use caste to fetch more and more vote out of the ignorant and illiterate majority of Indian voters. The regional parties are using caste as a means to serve their political ends. But the most important trend which we can mark about caste politics is that - All the political parties are now interested not only in a single caste or group of caste rather they are trying to please all the dominant and major caste in any particular area. The most recent instance can be seen in the social engineering done by Ms. Mayawati (Chief Minister of Uttar Pradesh), who have tried to bring even Brahmins and Kshatriyas under the same umbrella under which the Dalit Samaj was sitting with a sense of security. Like this, the BJP, even being a party of Upper castes, is nowe trying to please the lower castes.
Sir, I would like to know whether caste will remain significant in future too, when all the parties are making themselves more and more inclusive in terms of caste?
If all the parties will seek the support of all the castes, then what will be the essence of the caste politics? This may lead to the disappearance of caste from the Indian politics in general and politics of Uttar Pradesh in particular.