Are You Potty-Drained? Early Lessons in RVing. 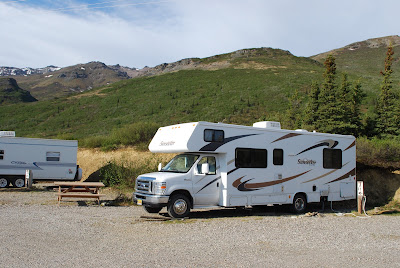 In an RV Park off the George Parks Highway outside the Denali National Park and Preserve
Arguing is generally not a good way to start a vacation. But since it involved a most crucial aspect of our holiday – our mode of transport – we really didn’t have a choice but to haggle heatedly over it.
We had booked air tickets to Alaska for 12 days and now we needed to figure out how we were going to see this monumentally large American state. Should we hire a car? Take ferries? Charter little planes? Do all three? Or do the unthinkable and rent a 29 foot RV (motorhome)? It was unthinkable because none of us had driven in the US before and yet here we were discussing plans to rent a truck-sized home and tootle off into remote parts of the state.

Arguments therefore were bound to ensue. Our five member group had seven opinions on the viability of the plan and in the end the proponents of the RV prevailed; although only after detailed research that included reading other peoples testimonials and consulting every conceivable guide book and website on traveling in Alaska. RVing, we finally concluded, was a venture worth undertaking.

So it was with a fair amount of nervous anticipation that we landed in Anchorage for an RV tour through south-central and interior Alaska. The most important document to accomplish all of this was of course an international driving license. The license issued in Tamil Nadu looks a bit dodgy and not surprisingly the lady doing our paperwork in Anchorage gasped and made an “if-you-say-so” face when she looked at it. But since we didn’t look like highway robbers she probably decided it would be safe to hand over the vehicle after all.

We were given an RV tutorial by Gary who gave crisp, clear instructions, including assurances that driving and living in the RV would be as easy as pie – unless of course we all got mad at each other and wanted more than 2 square feet of our own space. I made furious notes while Gary went through the steps on how to drain the potty, refill the water tank, turn the dining table into a bed and other pleasures of life on wheels. My notes would be needed, I thought, if the RV suddenly caught fire, spluttered to a halt in the middle of a frozen highway or sailed into a ditch.

Before I get into our travels, let me say that I am now a life long fan of RV design. Five adults thrown into a space of less than 300 square feet, sleeping in three separate beds, cooking dinners, playing cards, living out of small suitcases and mostly getting along is a remarkable feat of interior design amongst other things. Not to mention, that the thing moves, takes you over hill and dale, and gives you the most stunning views you could wish for from your window.

We took custody of our RV and decided to take a spin around Anchorage, figure out how the RV drives and buy groceries to stow away in our little refrigerator before heading out of the city. We moved slowly out of the RV park and onto the street and in a few minutes found ourselves barreling down a one-way street, going in the wrong direction. We immediately pulled into a parking lot and turned around hoping, that the gadget on the traffic light was not a camera.

That blunder notwithstanding, we found the RV very easy to drive thanks to the modern miracle of power steering and empty Alaska roads. We wandered over the next 12 days, first by heading south into the Kenai Peninsula, then west towards Valdez and finally north towards the interior to Fairbanks stopping off at several small villages and towns along the way. Alaska has a small but excellent network of highways designed to ensure that you never get lost. These highways cut through such spectacular country that it would be a crying shame not to stop and be able to enjoy the quiet, majestic beauty. On the Seward Highway with the mountains on one side and the waters of the Cook Inlet on the other, we crossed several buses packed with tourists and I couldn’t help but feel sorry for the poor souls who could only gaze from behind a wall of glass or stop only when the driver thought it best.

Our RV company had thoughtfully kept a copy of ‘The Milepost’ – a magazine with elaborate maps and information about facilities at every milepost – in our vehicle. This is a Bible for road users in Alaska and we could see why. While we could park the RV anywhere we wanted for the night, we generally wanted to stay in RV parks where we could access the internet, use proper showers rather than the RV shower, refill the water tank etc. We would consult ‘The Milepost’ around 6 pm, find an RV park in the vicinity where we wanted to park for the night, call, book a spot and drive into the park around 8 pm. We would settle down to a snug evening hoping for dark skies but in May Alaska has nearly 20 hours of sunlight so the sun would “set” close to 11 pm and “rise” again by 4 am.

Its hard to say if driving in Alaska during peak tourist season between June and September, would be as easy as it was for us towards the end of May. But in May driving was so wonderful we wondered why more people weren’t doing it.

It is possible that we won’t miss putting on plastic gloves and draining the pot every morning (although it has great potential for character-building). But beyond that there can and must not be any arguments about whether RVing is a good idea. We are now in complete agreement, which is a great way to end a vacation.

This piece was published in The Hindu Business Line on 13th November 2009.