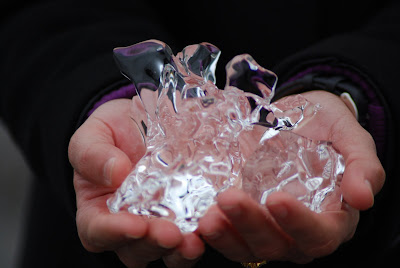 Ice on the edge of the Grewingk Glacier Lake 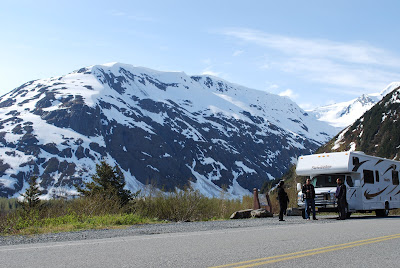 Driving down the scenic Seward Highway in an RV 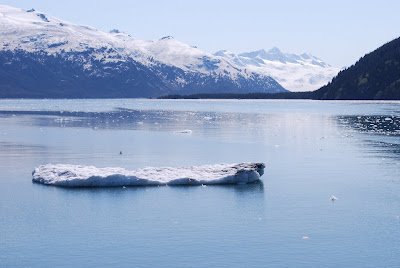 The icy waters of the Prince William Sound 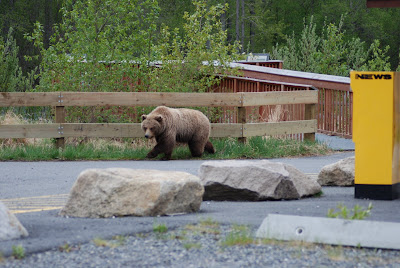 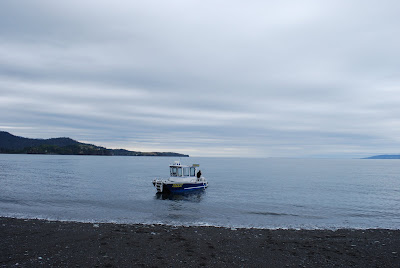 Todd, our boatman drops us off at the Kachemak Bay State Park 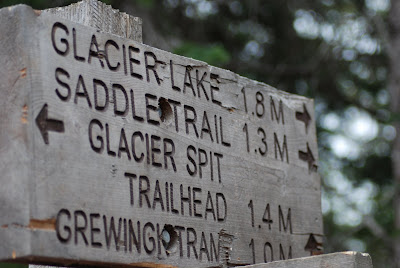 The Glacier Lake Trail inside the Kachemak Bay State Park 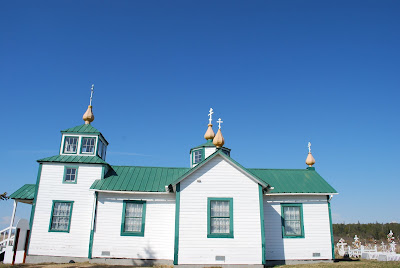 A Russian Orthodox Church in the village of Ninilchik

It sounded like the tinkling of ice cubes in a glass; except there was no glass, only a large lake. The water on the edge of the Grewingk Glacier Lake had turned into cubes of ice and gentle waves knocked them against the gravel on the shore creating a jingling sound I had never heard before in the outdoors.
From the calving of a glacier through the cries of a kittiwake to the crunching of your own footsteps on a lonely gravel beach - in Alaska, you have to listen as much as you have to look. In bear country, your safety could depend on it.
With the goal of covering as much of south-central Alaska as possible, we rented a 29-foot RV (recreational vehicle or motor home) instead of getting on a cruise ship: No need to book hotel rooms or plan our sorties into the great outdoors and we could stop anytime to enjoy the Alaskan wildlife, landscape and history. RVing in the crisp early summer on Alaska's empty highways was freedom unlimited.
We picked up our RV after landing in Anchorage and headed south for the Kenai Peninsula where our first stop was the port town of Whittier. To get there we started down the eye-candy road called the Seward Highway which is flanked by the Cook Inlet and snow-capped mountains, with views to challenge the sharpest drivers' concentration.
Whittier is a small, dull town but it is one of the gateways to the Prince William Sound. We got on a boat to make the day-trip through the Sound to look at glaciers. Everytime a glacier came into view the captain of the boat inched as close as possible to it and cut off the engines as everyone on deck waited and watched for calving - the process by which chunks of ice break off resulting in the birth of an iceberg. It was hard to train our sights on the exact location where the ice was calving because of the wall of white before us but everytime a piece fell it went down with such a clap of thunder that you will eventually see one.
From the Seward Highway we headed further south down the Kenai Peninsula on the Sterling Highway. Back in 1867, the Russians sold Alaska to the Americans for the grand sum of $7.2 million. On our drive down the Peninsula we kept a keen eye out for this Russian influence. Wanting to see atleast one Russian Orthodox Church we got off the Sterling Highway entering the village of Ninilchik and found one at the end of the appropriately named 'Orthodox Avenue'. Just before the land dropped sharply into the sea, stood a beautiful white church with a green roof and ochre onion domes. As we marvelled at the Matryoshka dolls inside, a bishop emerged to start a service with all of two individuals. We stood near the entrance in awkward silence for a few minutes before shuffling out, only to find a notice about a funeral service! We had stupidly stumbled into someones 'leave taking' ceremony!
From leave taking ceremonies we finally reached lands end at Homer for the stuff of life. We hired a water taxi to take us across the Kachemak Bay to the wilderness of the 400,000 acres of the Kachemak Bay State Park full of forests and wildlife. Bulked up in layers of warm clothing, we raced along the water, landing on a lonely shore 20 minutes later. Todd, our boatman from upstate New York (the tourism industry seems run entirely by non-natives from the lower 48!) promised to return in five hours. We embarked upon the Glacier Lake trail, keeping up a loud chatter to alert any bears in the neighbourhood of our presence - a good thing too, because we came across dollops of fresh bear dung. Thankfully, the trails in Alaska's state parks are well-marked and watched over: Hikers sign a register before setting off, ensuring their absence will be noted should they get lost.
The trail took us uphill through a wooded area of spruce and cottonwood trees, plateaued and then opened up suddenly into a beautiful lake with the Grewingk Glacier flowing frozen into it. And it was here that we heard nature's little jingle of ice cubes clinking against the shore. The only disruption came from a cawing raven, probably irritated by us intruders.
From Homer, it was time to turn around the RV and head back to Anchorage to proceed east to Valdez. But we still had a gaping bear-sized hole in our Kenai experience. This longing to see a bear was fulfilled in the most unexpected of places - a parking lot. Halfway to Anchorage we pulled into a parking lot by a stream near Cooper Landing and found that about 20 feet away from us a brown bear was scrounging for food. He stayed completely oblivious to the five faces plastered against the window of the RV. We had five exclusive minutes photographing him up close till alert drivers along the highway started pulling in, sending him right back into the woods.
After four days on the Kenai it was hard to imagine that a few US Congressmen had opposed the purchase of Alaska from Russia. The place was derisively labeled "Icebergia" and "Walrussia" and the newspaper New York World declared, "Russia has sold us a sucked orange." Clearly, in the mid-19th century, it was hard to imagine you could do anything in Alaska but bundle up in layers of wool and stay indoors. But an Alaska summer is incredible fun, offering plenty of options and 20 hours of daylight.
And of the many sounds we loved, perhaps the one we grew most attached to was the gentle roar of our RV - a great big beast of a vehicle that took us to all the incredible nooks and became home even while allowing us to roam free.
Published in the Mint on 11th July 2009
Posted by Alaphia Zoyab at Tuesday, July 14, 2009

I enjoyed reading through this! In the absence of a life experience this might probably suffice for the rest of my life.
At places, it was like reading a travelogue-cum-novel! For just a while I was transported into Alaska.

Glad you enjoyed it Srinivas!

We missed out on Alaska....will try to make it someday.:)

Hey Ali! Of course you will.

Advertisers seek affiliates (Website / Blog owners like you) to promote their products and services. In return will pay you high commissions. It's as easy as placing a link or a banner of another web sites products or service on your web site. This can be very lucrative if you have a busy web site.

Whats all this? Remote reporting and all :) As usual the last paragraph is the best !!