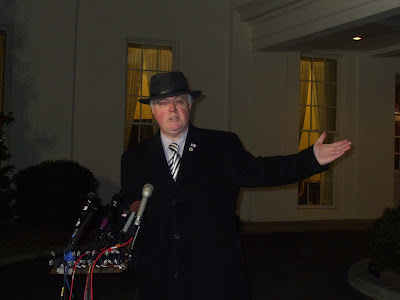 John Clodfeller, father of Kenneth Clodfeller who died in the attack against the USS Cole in 2000. 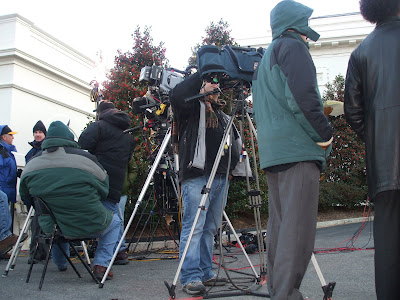 The White House press waiting for the 9/11 and Cole families.
For all the Republican talk about supporting the troops, it was with some surprise that I learnt that George Bush hadn’t once met the victims of the bombing of the USS Cole in which 17 American servicemen died.

On February 6th, President Obama met the Cole families along with families of the victims of 9/11.The meeting was meant to allay some of their fears about the closure of Guantanamo Bay and the 120 day suspension in legal proceedings against terror suspects detained there.

The press staked out outside the West wing of the White House for a few hours waiting for the families after the meeting. The 9/11 families left without speaking to the media but the parents of Kenneth Clodfeller, who passed away in the Cole attack stayed to speak to the press. Accompanying them was the retired Cmdr. of the USS Cole, Kirk Lippold.

Cmdr. Lippold had criticized President Obama’s decision to close Guantanamo Bay and while he emerged from the meeting “pleased with what the President said”, he still had strong reservations about the decision. He said, “It (Guantanamo Bay) served as a symbol of the war on terror that was affecting our national interests worldwide and overall the only issue that I still have with it was that he closed it on a one year date and still has to articulate procedures and policies for what hes going to do. So until those procedures and policies are actually laid out I think there is still a lot of concern as to what effect it’s going to have on our nation’s security.”

I asked him if that meant that he agreed in principle now with the closure decision to which he said, “I think that in principle the reasons that he gave may be good. Its well intentioned. But the problem I have remains that we still don’t have any procedures. There’s no process. He hasn’t articulated the specifics as to what hes going to do which means that they haven’t thought through the second and third order of impacts of that decision and we cannot afford to be arbitrarily setting deadlines without having to explain what the impact is going to be. We must have that.”

The families have been somewhat taken aback by the pace at which policy reversals have happened and Cmdr. Lippold strongly felt that President Obama should have met the families before making the decision to close Guantanamo and not after. That said, Cmdr. Lippold was also pleased that the White House had attempted to start a dialogue with military families. He said, “When it was all said and done he offered somethings that previously has never been done and for the first time, military families and families of 9/11 are going to have a seat at the table to be able to help this administration and have an open door as we articulate the policies that are going to keep our nation safe. I’m looking forward to working and seeing how they do.”

Most of the families came to the meeting with the impression that President Obama was going to release all the detainees of Guantanamo Bay – a fear that was allayed atleast for one USS Cole victim’s family – the Clodfellers from Mechanicsville, VA.

John Clodfeller’s son Kenneth’s body was the last to be found after the Cole bombing in Yemen. The former Air Force Officer became extremely emotional while talking to the media. It was clear that being remembered by the highest authority in the land meant a lot to him and in fact, the new young, President seemed to have had a remarkable influence on him.

Describing the meeting he said, “He (President Obama) really wants our help in trying to resolve this detainee issue. I did not vote for the man but the way he conducts himself, the way he talks to you, you can’t help but believe him. This President has a good possibility of being one of our best Presidents just because of the way he is as a human being.”

Abd-al-Rahim al-Nashiri has been accused of masterminding the USS Cole attack in which Kenneth Clodfeller died. But al-Nashiri has said that he was tortured to extract such a confession. The CIA has admitted that it “waterboarded” him but the interrogation tapes have since been destroyed.

Referring to the status of al-Nashiri Clodfeller said, “I can’t imagine an American that’s in one of our prisons for eight years without anything being done for him. It is just unconscionable that it’s taken eight years. They had him locked up and incommunicado. I asked CIA once, “Where is he?” and they refused to tell me," he said.

Clodfeller had tried to meet with President Bush through his representative in Congress but in vain. He said Bush’s refusal to meet with the Cole families led him to believe that “there’s something that they don’t want us to know about.”

His wife Gloria Clodfeller who was also at the meeting with Obama said that she agreed with President Obama’s policy of closing Guantanamo because it was “putting a black eye on America.” She said, “Hes trying to build up the way people feel about America again. To get our respect back which we have lost. I agree with that. Hes not closing it to let the prisoners be released. Hes just establishing a whole new mission so that way they can make the process move like its supposed to be so that by the end of the year everybody should know whats going on and they should be able to get the place cleared. And that the legal process should be exactly what it should be.”

“I just don’t believe in torturing or hurting people or anything like that. That’s my faith. Prisons should be able to rehabilitate people and no they’re not doing that. They’re just leaving them there to sit and stew and think and come up with more ideas about what they can do once they get off.”

Of the meeting with the President she said, “I feel like at least we’re getting an answer. At least somebody is talking to us. Somebody is letting us know after 8 years, no you’re not forgotten…”

I’m not entirely sure how other victims’ families felt after the meeting with President Obama. The Clodfellers are just one of the nearly 40 who attended.

Long since I got here to read and a pretty good subject and post to return to. Indeed, whatever Obama has or does not have, he seems to say the right kind of things and touch the right cords which I believe for starters at least is very important. And of course in Bush and Obama we probably have two starkly different personalities we could ever hope to see as successive Presidents: transparency for one - coming out and gesturing to the people that he (Obama) is there for them is a great sign something the Junior Bush never did for whatever reasons - sets them apart.
I have not followed the closure of Guantanamo Bay that closely but I guess until the U.S government does show that it has a plan in place, there might be some unrest albeit without too much noise!

Great piece - as always.
And after so long too!

Obama is amazing for sure but I always worry about the expectations. People are looking up to him to do so much and I worry that no human being can live up to that. There is so much to do really and how much can one man do?