'THE IDEA OF INDIA' 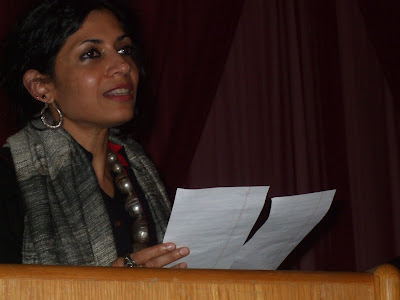 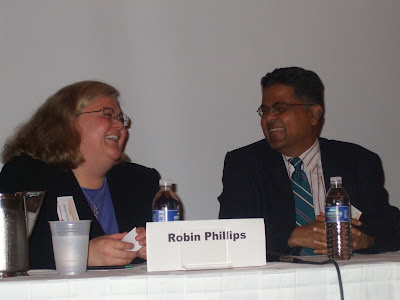 Robin Phillips and Omar Khalidi share a laugh before the panel discussion begins. 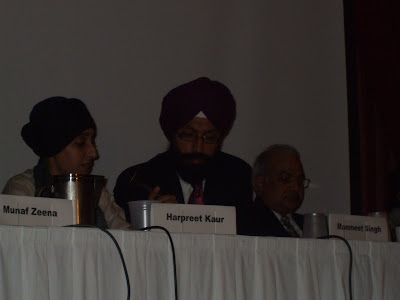 Film-maker Harpreet Kaur let the words echo through the room seven times even as the audience shifted uncomfortably.

She was driving home the horror of seven rapes experienced by one of the victims of the 1984 pogrom against the Sikhs in . She doesn’t want people to forget because 24 years later the Sikhs are still awaiting justice.

The lack of justice in was under the spotlight at the 4th annual conference of the Indian Muslim Council, (IMC-USA). Jawad Khan, President of the chapter says, “IMCs founding members were Muslims and hence the name. But it is for all minorities, not just for Muslims. Our effort is to safeguard (everyone’s) rights.” It was formed in 2002 after the genocide and one of its lobbying successes has been being part of a coalition that got the US State Department to revoke Narendra Modi’s visa.

Nearly 450 people gathered at Meadows Club outside for the conference on the subject ‘The Idea of India: Challenges and Prospects.’ Most people spoke in Urdu, greeting each other with a warm, “Salaam Alaikum.”

The keynote address was delivered late in the evening after 8.30 by Tarun Tejpal, CEO and editor-in-chief of the investigative magazine, Tehelka. He spoke of the need to move away from the “politics of difference and back to the politics of ideas.” He said, “ is a free country and it is incumbent upon us to stand up for our rights and get them, and that is the beauty of the founding principles of this country.” IMC awarded him the Moulana Muhammad Ali Johar Award in Journalism. He received a standing ovation as Zakia Jafri, widow of Ahsan Jafri who was killed in the genocide, handed it to him.

The conference, began at mid-day after namaaz with the screening of four short films. All four examined the violence visited upon different minority groups – ‘The Widow Colony’ about Sikh widows of the 1984 killings, a CBS documentary by CNN’s Christian Amanpour on Dalits in Tamil Nadu, ‘Encountered on Saffron Agenda’ a documentary on encounter killings in Gujarat under Narendra Modi and an NDTV documentary on the murderous attack on Christians in Orissa called ‘In the Name of God’.

The films set the tone for the day’s discussion – minority groups are increasingly threatened even as perpetrators of violence are going scot-free.

A panel discussion on “Impunity: A Roadblock to Justice” saw panelists raise several human rights abuses taking place in . Munaf Zeena, a member of the Muslim Council of Britain had flown in from the especially for the conference. He said, “The numbers in don’t matter because it shocks the conscience of humanity. Just as did, so did .” He added, “ is afraid of international accountability for its actions.”

Another panelist, Rahul Deepankar, a doctor and a peace activist, raised the issue of lack of development in , remarking, “My school today in rural Uttar Pradesh is worse than when I left.” Harpreet Kaur minced no words while reminding the audience of the 1984 killings. She said, “The world’s largest democracy is raping its mothers and brutally butchering its men. How can call itself a democracy?”

The audience was asked to write down their questions for the panelists which were then read to them by an IMC member. But there was such a flood of paper that most questions went unanswered. Manmeet Singh who co-produced ‘The Widows Colony’ with his wife Harpreet Kaur was asked if the Sikhs had received justice after Manmohan Singh became the Prime Minister. To nods of approval from other panelists he said, “Lets create social bonds. Lets not leave Christian issues to Christians, Muslim issues to Muslims and Dalit issues to Dalits.”

After a quick coffee break the second panel discussion began on the topic, ‘Strengthening India’s Secular Democracy.’ Dr. Angana P. Chatterji, a rights activist and professor of social and cultural anthropology at the California Institute of Integral Studies questioned the very basis of ’s secular experiment saying, “Secularisation has become concomitant with Hinduisation. We need to re-formulate and question the notion of our secularism.” Dr. Chatterji was also given the Tipu Sultan award for courageously serving . With her right hand placed gently across her heart she appeared genuinely moved in accepting it.

Robin Phillips, executive director of the Advocates for Human Rights, explained the definition of human rights but also took it out of an academic context by asking, “How can we ensure that good people are not silent in the face of human rights violations?” Here she urged her audience to be more attentive in small everyday acts and conversations.

Dr. Omar Khalidi from MIT and ’s Aga Khan programme for Islamic Architecture echoed Harpreet Kaur’s sentiments by questioning whether was a democracy at all. He said, “Since 1958, and North East India have been under the Armed Forces Special Powers Act (which gives them impunity from due processes of law).” He was in agreement with Dr.Angana Chatterji’s assessment of the Hinduisation of society saying, “If you cannot prove that you are Muslim or Christian during a census then you are automatically a Hindu!”

It was a long day at the conference but most people appeared to have found the speakers very engaging. ’s democratic credentials were heavily challenged given that large minority and subaltern groups simply live below justice.

'Can India call itself a democracy' - a very valid question. Merely having elected representatives - does it make a nation democratic? Liberty, Equality, Fraternity, Secularism-are all these confined to a mere mention in the constitution? Well, we are not 'undemocratic'. But we have a long way to go before we could claim to be a democracy in the truest sense of the word.

Anjana Chatterji's remark "If you cannot prove that you are Muslim or Christian during a census then you are automatically a Hindu!” is hugely thought provoking. Its Hinduisation at its worst. Its like elimination. By default, one is a Hindu. Others are almost incidental. I wonder if its really that bad, but there remains a lot to be changed, for sure.
Sathej

This is a very complex question. Also, just a quick correction - it was Omar Khalidi who raised the point about the census.
Thanks.

Alaphia, I dont know if after my previous comments, my comments are still welcome. But if they are, I would like to add one 'minority' that are continually harassed, that is migrant labourers. Whether it is the MNS in Maharashtra or rebels in Manipur, their lives and limbs seem expendable ... Perhaps they dont belong in a forum for Indians abroad, but their stories have to be told. In India, it seems that anyone who does not have strength in numbers can be preyed upon.

Vikram, I agree with you.