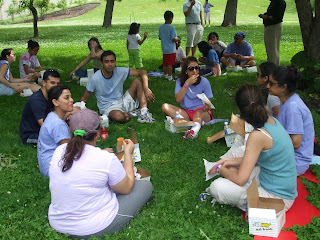 Participants at the walkathon cool off in the grass at Lincoln Park. 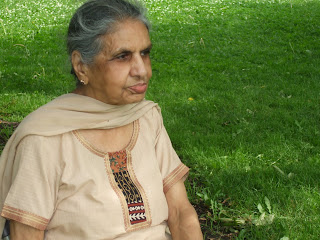 Kanta Khipple seated under the shade of a tree as the walkathon started. She is one of the early founders of Apna Ghar. Now in her mid-seventies, she recently started a programme at Apna Ghar for elderly women victims of abuse.

“I have a personal story. When I came to the 25 years ago, my husband used to abuse me.” But reluctant to discuss anymore, she (name withheld) disappeared into the crowd of blue T-shirts gathered at .

On a bright and typically windy morning in , nearly 200 people from different parts of got together for the “Stride Against Violence.” Most of them wore the event organiser’s blue T-shirts with this message on the back. In its second year, the walkathon and fundraiser was organized by Chicago-based Apna Ghar, a shelter for victims of domestic abuse. As honorary event chair, Illinois State Senator Heather Steans also joined the walk along with her husband.

There was a carnival-like atmosphere with lion dancers spicing things up before the walk. After a quick session of stretches the walkers set out at 9.30 on June 8th on a 5 kilometre route, to the sound of drum-beats around the area.

As the crowd took off, sitting on a chair, under the shade of a tree, Kanta Khipple smiled proudly. “In our culture we don’t speak about domestic violence. We tend to tolerate it,” she recalled. “But today we are preventing drastic abuse.”

Kanta Khipple and Prem Sharma, still with the organization, are part of the original founding five members of Apna Ghar. The idea was developed after Prem Sharma set up an Indo-Crisis hotline in 1984 to answer calls from women in distress. “At the time I had no idea how prevalent domestic violence was. But with our answering service we documented each and every call and found that it was very high,” said Prem Sharma.

They also found that women from would visit existing shelters but because of difference in language, food and culture, they would leave mainstream American shelter homes in just a few days. To serve all these needs, Apna Ghar was started in 1989.

The walkathon has become an important event in the fundraising calendar of the organization. Apna Ghar’s development director, Sharmila Kana said, “I think we have managed to raise approximately 20,000 to 25,000 dollars from the walkathon.”

After the walk, participants sat around in the grass at cooling off, snacking and enjoying a lovely summer day. In a tent with a stage the entertainment programmes were rolled out for them. It included tap dancing, bhangra, a lottery and even henna amongst other things. Even a few curious residents of stopped by briefly to watch.

Close-by in the registration tent the impending rain was providing some clues as gusts of wind kept blowing papers and empty water bottles off the table. As the year’s second fund-raiser was drawing to a close, Rehmah Sufi, a development associate said, “The federal government is cutting social service funding and we are trying to figure out how best to respond to this.”

Prem Sharma remarked, “Right now we are 80% dependent on the government and 20% on funding. We need to change that.”

Apna Ghar offers a range of services to its clients who are distressed women victims of physical, mental, emotional and sexual violence at home. It operates a 24 hour helpline, a shelter home, transitional housing along with a range of rehabilitation services and legal services. It has recently even started taking in elderly women who are victims of neglect. The need for these services has not gone down. Munching a sandwich, Neelam Kacker, the Treasurer said, “It is a bottomless pit and we need help all the time.”

One female participant said after the walk, “I support this cause because I was also once a victim.”

As the day drew to a close, dark clouds appeared over . When the last thank you was said by compere Sharmila Kana, and the crowd began to leave, almost on cue, the rain suddenly started to come down in big, heavy drops, drawing to a close an event that raised money to help the stigmatized but brave women who left their homes after suffering domestic violence.

Very sad. So dignified a protest against a horrific act. Hope things have become a bit better now than those days when they didn't have any support. Brave women, indeed.