STALIN, 'SHAKOTIS' AND SALSA IN LITHUANIA 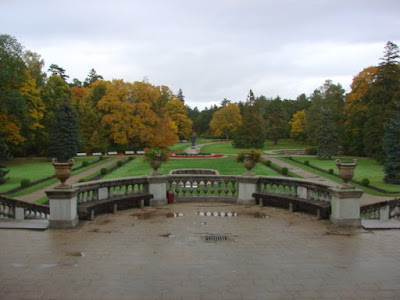 The Amber Museum in the seaside town of Palanga. The Museum is in a 19th century Palace set amidst these beautifully manicured gardens. 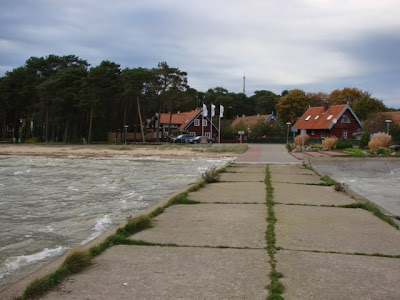 A view of the village of Neringa on the Curonian Spit. 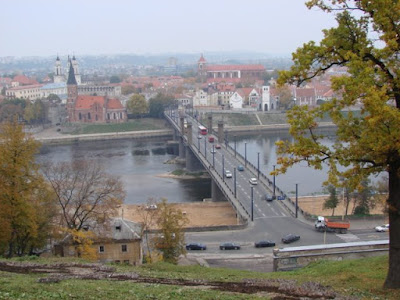 (Photos by Kannan Narayanaswamy)
Suddenly in 1991, when the Berlin wall fell and the Iron Curtain parted, for the curious traveller all the roads less travelled were finally open. It’s precisely what makes a visit to Lithuania so rewarding. It lies on that road in East Europe that’s buzzing with new freedom and new money, but retains a distinctive stamp of the old communist era and teases the curious visitor to discover where the twain meet.
Landing in the capital Vilnius at midday in late-October, I was excited by the grey streets, the graffiti on bare walls next to Baroque churches, the steel and glass buildings, the old grim faces, the young, trendy girls and the modern cars. In every eyeful there was a slice of all the changes Lithuania has experienced since becoming independent of former USSR. Finally, I said to myself, some good old-fashioned history — not in boring, gigantic, disinfected museums but out in the streets and in peoples’ conversations. Lithuania was going to be exciting and edifying.
A week is a good time in this tiny country of 3.4 million people because it’s easy to crisscross by road if you’ve decided what you want to see (or haven’t). My ten-day agenda however was dictated entirely by my Lithuanian hosts which was fine with me because I couldn’t have planned it better myself. All I really wanted was to get a glimpse of the old, communist Lithuania and the new capitalist EU member. I got a lot more and wondered why this beautiful country was so under-reported.
But the good thing about not knowing anything about a place is that everything holds a surprise. And in the controversial Grutas Park, I walked around with my jaw open. Located 130 km from the Capital, this place is also referred to by the slightly ominous ‘Stalin’s world.’ You walk through the park under the cold gaze of the gigantic statues of Stalin, Lenin and several lesser-known leaders of Lithuania’s brutal 20th-century experience under Soviet rule. After Lithuania became independent it pulled down their statues of all these reviled men and dumped them in storehouses. Later, a Lithuanian millionaire bought them up to set up the park. Walking through it is an Orwellian experience as loudspeakers blare out commands from old wooden watchtowers and old train compartments remind you of the thousands of Lithuanians sent to their deaths in Siberia.
Walking around its many hectares can make you hungry and a local café completes the experience by offering a “nostalgia menu”, which of course goes with vodka shots. However, one guest at our table went too far when he raised a toast to Russia. Our Lithuanian hosts almost choked on their drinks.
The faux pas however was soon forgotten and we continued to drive around the country, stopping off at towns like Alytus, the impossibly named spa resort of Druskininkai, and the cities of Kaunas and Klaipeda. Walking tours with a local guide are the best way to discover these places because they’re very small, afford wonderful views and the local guide can narrate interesting stories of local resistance against the Soviets.
Sometimes, though, the nicest part of the day would be spent sitting around in the living room in the evening with my hosts, drinking coffee and eating the strange-looking, great-tasting Lithuanian cake called shakotis.
Regardless of what draws you to Lithuania, a visit to the ecological wonder called the Curonian Spit is an absolute must. It’s a challenge of nature kept habitable by human effort. The spit is a 98-km-long island of sand separated from the Lithuanian mainland by a lagoon.
We boarded our car onto a ferry to reach this UNESCO World Heritage Site and drove through its charming villages of cottages between pencil-straight lanes. But what makes the Curonian Spit so special is that half its landscape looks like the desert of Arabia while the other looks like the Black Forest of Germany. So, it is dull brown sand and dark green forest surrounded by deep blue sea. This erstwhile western edge of the communist empire is a place where you can get away from it all. Just don’t wander off too far on your Lithuanian visa though — half the island is still with Russia!
As the trip was winding down I was casting about for souvenirs, and one of the nicest things about shopping in Lithuania is that you don’t have to buy cheesy ‘I love Lithuania’ T-shirts and mugs. You should make the only sensible choice there is — amber. In the seaside town of Palanga we spent an afternoon gazing at the exhibits in the Amber museum, which was housed in a 19th-century palace set amidst vast botanical gardens. Of course, treat the amber in the museum store as an exhibit also because you’ll get it outside for half the price.
I headed back from the coast with lots of memories, a little amber and some litas (Lithuanian currency) to spare. My vacation was coming to an end and to stall the impending sorrow we headed out for a last evening on the town.
Vilnius nightlife was a fantastic surprise — it’s alive, it’s raucous and it’s wild. The people in the nightclub were from everywhere… it could’ve been a club in New York, Melbourne or Mumbai. But lovely Lithuania is special — where else will you get Stalin, shakotis and salsa on the same trip?
Published in 'The Hindu BusinessLine' on 14th March 2008.
Posted by Alaphia Zoyab at Friday, March 14, 2008

Where are you these days.Once upon a blue moon you update your blog.
So nobody visits here often.

Hope you remember me, Rashmi from sneha sadan. Good to see you here. Just came across ur blog. Hope all's well.

Hi Matcher,
Thanks for being one of the few who visits.

wow.. cool place to visit.. wat r u upto now-a-days in washington? and is ndtv history?