In the centre of the city of Kolding, stands the castle of Koldinghus (pron. Kollinghoos). On this site once stood a fortress built by the Danish King - Erik Glipping in the year 1268 - meant to guard the border between the Kingdom of Denmark and the Duchy of Schleswig (in Germany). The fortress was rebuilt as an unfortfied castle in the mid-16th century at which time the King often stayed at Koldinghus. In the 1720s the castle was again rebuilt but by then the members of the royal court were only infrequent visitors and the castle was allowed to fall into disrepair.

In 1808 some Spanish auxiliary troops, stationed there in the Napoleonic wars stoked the fire in one of the hearths so fiercely that the castle itself burnt down. Reuilding work was not started until as late as 1890. 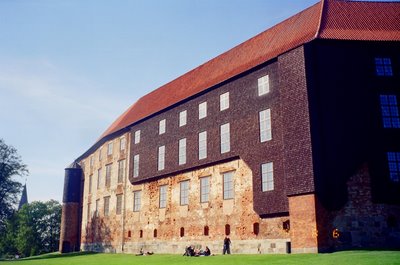 The rebuilt castle (above) today draws plenty of visitors. The architects who restored it are Inger and Johannes Exner. Scandinavian design is truly classic and minimalist, employing material in its natural form to achieve both function and style. The castle has been restored in keeping with that tradition. Indeed, the reconstruction is modern and seems incongruous at times – contrasting sharply with the weathered red brick walls, although, it does not diminish by way of aesthetics. 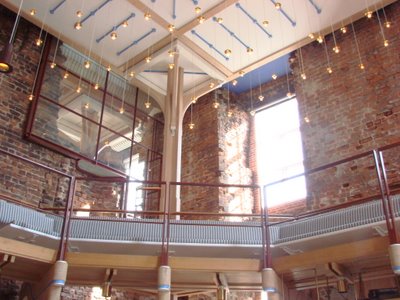 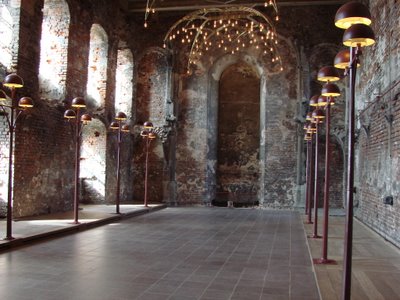 There is a magnificent view (below) from the top of the Great Tower. (Great Tower known as 'Heroes Tower' was added around 1600.) 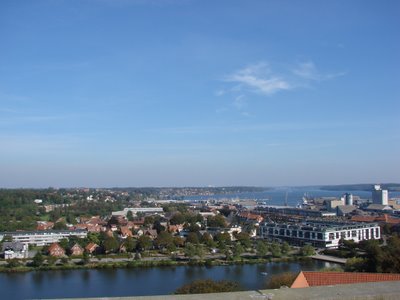 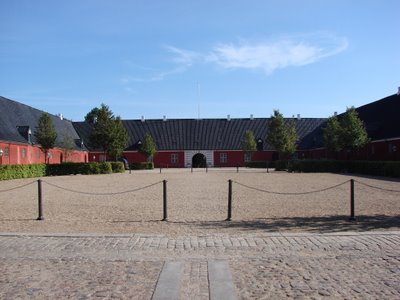 This is where you park your car, where the stables once were. 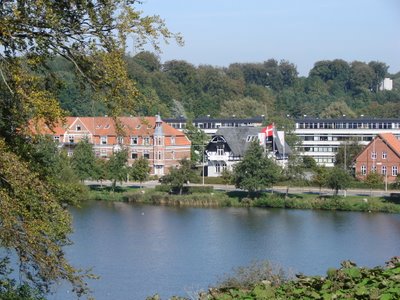 Right next to the castle is a river where you will always find a boat. This particular boat (sorry, no picture) has to be kept ready at all times for the Queen. If the Queen were to arrive at the castle and wanted to cruise down the river, then she should never be disappointed and for that aim to be fulfilled the boat remains docked in this river perennially.

The Danes incidentally are quite crazy about their monarchy, following their lives and loves as closely as any monarcho-phile in, lets say, Britian. I asked an agricultural teacher, Jørgen P. Jensen why they loved their monarchy so much and he said, “I think its because they are quite sensible people.” Down to earth for sure, because when we were in a place called Gråsten (pron. Grosteeng) where the Queen has her summer home, people say, you can actually run into her, shopping for groceries in the neighbourhood supermarket.

Hello,
Great pictures again and quite an informative write-up.The Danish monarchy seems refreshingly different from what some of our very own politicians display-a posse of policemen wherever they go!

Thats true Sathej. These pictures are taken by a friend of mine who came on the trip.

Hello Alaphia,
I think there is some problem in your blog.Once I type http://alaphia.blogspot.com/, I get a page which shows your October 2006 entry 'Corny but Funny'as the Current post.I have to go to December 2006 to view this post.I think this problem has surfaced only today-December 5,2006.
And a request,if NDTV is planning to put a show on the December Season,please let me know.
Sathej

Quite strange!Now,it is back to normal.Maybe,there was an update going on.