10 things to know about the injusitce done to Dr.Binayak Sen 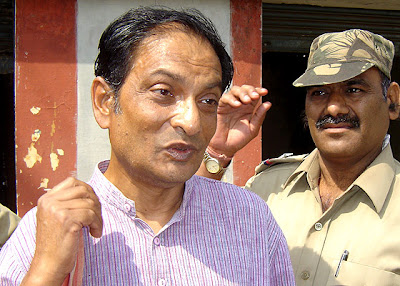 Dr.Binayak Sen's appeal hearing is coming up on Monday, 24th January. Any reporter will tell you that covering a legal battle involves so many twists and turns that audiences and readers end up getting overwhelmed and bogged down in the detail killing their interest. To simplify things, here is a brief background and some key things to know about Dr. Binayak Sen.
Introduction: Dr. Binayak Sen is a pediatrician from Kolkata. He has lived in the central-Indian state of Chhattisgarh since 1991 where he founded an NGO that provides medical care to 20 adivasi villages through a network of community health workers. He has also set up a hospital funded and run by mineworkers. He is the vice-president of one of 's leading human rights organisations - the People's for Civil Liberties (PUCL).
In Chhattisgarh where he works, a violent armed conflict between the banned Communist Party of India (Maoist), the Central Reserve Police Force (CRPF) and a militia group Salwa Judum, which is allegedly supported by the state government, has led to widespread human rights violations and abuses against members of local communities. Dr Sen has been a vocal critic of the conflict, drawing attention to these abuses and calling for the protection of the rights of local communities.
Here are 10 things to know about Dr. Binayak Sen’s case:
1) Dr.Binayak Sen has lived in Chhattisgarh since 1991 where he has been heavily involved in running rural community health projects.
2) Dr. Sen was arrested in May 2007 shortly after he publicly criticised the Chhattisgarh police for killing local adivasis & not armed Maoists as the police claimed.
3) He had also publicly criticized the Chhattisgarh authorities for enacting state security legislation which put excessive restrictions on human rights.
4) The lower courts repeatedly refused Dr. Sen bail until May 2009 when the Supreme Court finally ordered his release.
5) Then again on Sen was sentenced to life imprisonment after being convicted of sedition and conspiracy after an unfair trial.
6) Dr Sen has been convicted of sedition (Sec. 121A of the IPC) and conspiracy (Section 124A) and under various sections of the Chhattisgarh Special Public Security Act 2005 (CSPSA), and the Unlawful Activities (Prevention) Act, 1967 (UAPA). His trial commenced on 30 April 2008.
7) On 5 Jan. 2011 Dr. Sen challenged his conviction and life sentence by filing an appeal in the Bilaspur High Court.
8) The vaguely worded provisions of the security legislation used to charge Dr Sen – the CSPSA which is only in force in the state of Chhattisgarh and the UAPA – are so broad that they may be abused to restrict and criminalize the peaceful exercise of rights and freedoms.
9) The shockingly severe life sentence handed down to Dr Sen will set a dangerous precedent, leaving open the possibility that state level authorities will seek to impose harsher sentences against outspoken human rights defenders across India.
10)  Demand Dr. Binayak Sen’s immediate release and tell the Indian government to drop all charges against him. Click here to take action.
Posted by Alaphia Zoyab at Thursday, January 20, 2011

I met Dr Sen in Chennai at Mithran Devanesan's home some 2 years ago. He had come to watch Sreekumar Varma's play "Midnight hotel" in which I had acted with Michael Muthu,PC Ram, Indrani Krishnaier and Shankar Sundaram. The play was done for CMC Vellore and that's how Dr Sen came to watch it with his doctor friends and colleagues.He seemed so involved and interested in the conversation we had about theatre and literature. And such a soft-spoken man who seemed a bit exhausted that eve.
Earlier,Unc had evaded the issue of interviewing him but that's a story I will tell you in person.
What a pity ! What a lost opportunity !

Indeed, a lost opportunity and finally I figured out why the messages weren't getting published.

Happen to visit your blog by chance. Glad. A sense of pride. There is not much in 2012. Do write. Visiting Mrs. Lalitha's blog brings to my mind another lady in Delhi, Sethu Ramaswamy, who had written a book 'Bride at Ten, Mother at 15'. I was lucky to typeset that book (in reprint).