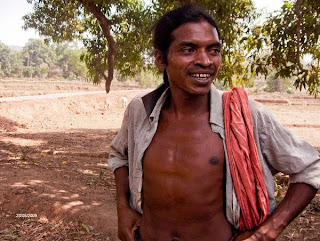 Sana Sikaka, a leader of the Dongria Kondh indigenous communities who was abducted by gunmen on 9 August, has been released. Another leader is still being held.
Sana Sikaka, one of the Dongria Kondh indigenous community leaders in the eastern Indian state of Orissa who was abducted on the evening on 9 August, was released yesterday evening.
He has informed journalists that he and Lado Sikaka, (in picture), were stopped at Izrupa at the foothills of Niyamgiri as they were leaving with a group of activists in a van to catch a train to . About fifteen men in plain clothes, armed with automatic weapons, had parked their two vans nearby and were hiding in a forest. They surrounded Lado and and said they were taking them. They intimidated the other activists, snatching their mobile phones and the van key and forced them to walk towards Lanjigarh, the nearest town. Then the plainclothesmen, along with Lado and , walked to the vans and then made a long drive towards the neighbouring district of Rayagada, stopping at a few places en route. Yesterday evening, when they reached Bijepur town, they pushed Sana Sikaka out of the vehicle, forcing him to commence a long journey back to Niyamgiri. They appear to have taken Lado Sikaka to Rayagada town and detained him there.
Lado Sikaka and Sana Sikaka are both campaigning against a proposed bauxite mine in the Niyamgiri Hills in the eastern Indian state of Orissa. Research by Amnesty International indicates that the Niyamgiri bauxite mining project, which would be located on the Dongria Kondh's sacred sites, traditional lands and habitats, is likely to result in violations of their rights to water, food, health, work and other rights to protection of their culture and identity. The project is currently awaiting clearance from India's Ministry of Environment and Forests.
Please write to the Governments of India and Orissa to take all necessary measures to ensure his safe return. Also appeal to them to launch an investigation into the complaint over the abduction of the two Dongria Kondh leaders, in full compliance with the country's obligations under international human rights law.
You can write to or email the Chief Minister of Orissa - Naveen Patnaik at the following address:
State Secretariat
Sachiyalaya Marg,
Bhubaneshwar,
Orissa 750 001, India
Tel: +91 674 2536682
Fax: +91 674 2390562
Email: cmo@nic.in (or) cmo@ori.nic.in
Salutation: Dear Chief Minister
You can also write to or email the Minister of Home Affairs - P. Chidambaram at the following address:
104, North Block,
New Delhi 110 001, India
Tel: +91 11 2309 2462
Tel: +91 11 2301 7256
Fax: +91 11 2301 7256
Email: hm@nic.in
Salutation: Dear Home Minister
(Photo and text courtesy Amnesty International)