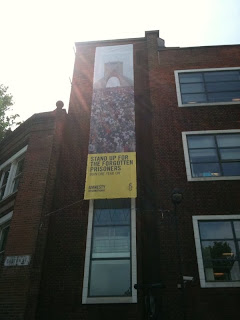 On her 26th birthday, Shiva Nazar Ahari, is in Tehran’s notorious Evin prison. Her birthday celebration happened thousands of miles away in London, outside the Amnesty International headquarters. At 1 pm on June 10th, Amnesty staff came together with cakes and candles to sing her a birthday song. At the end of it they yelled into the camera, with a message meant for the Iranian regime, “Release Shiva, NOW!” 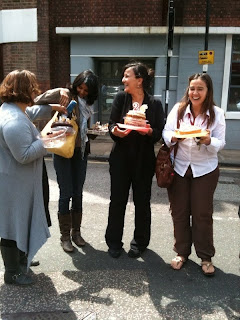 Shiva is a journalist and blogger and a member of the Committee of Human Rights Reporters (CHRR). She was first arrested in June last year for three months before being released on bail.
But she was re-arrested in December 2009 and has been in jail ever since. When her family spoke to her on the phone in February 2010 she told them that she had been transferred to a “cage-like” solitary confinement cell where she ‘couldn’t move her arms and legs.’
The charges against her are in keeping with the worst traditions of lunacy and insecurity that this Iranian regime displays. They include, “causing unease in the public mind through writing on the CHRR’s website and other sites” and the more predictable “acting against national security by participating in anti-government demonstrations” on 4th November and 7th December last year. Shiva says she was at work on both those days.
So today, from one female blogger to another – Happy Birthday! And more power to you in this fight.
Posted by Alaphia Zoyab at Thursday, June 10, 2010

It is extremely heart-rending to note that in the same world which fetes trivialities there are people of great substance who are going through torture and torment for a fault not their own - worse, ones fabricated and re-fabricated till fiction becomes fact, the lie becomes the truth and fear takes over prospective dissenters!

Anyway, I wish the blogger in question gets justice done soon - although I have always believed that justice delayed is simply justice denied.

Thanks a lot Srini. I wish there was some way to communicate everyones best wishes to her. But heres a link - if you want to do something. http://bit.ly/cwdctq

Hmm..quite worrying this trend of intolerance..

What a terrible injustice in this day and age.

Yup..Shiva is still in prison.