Protests Outside BBC Against Invitation to Far-right Party 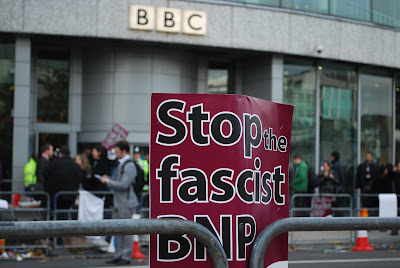 A poster outside the BBC Television Studios in Wood Lane in London.

A coalition of organisations under the umbrella of 'Unite Against Fascism' protested outside the BBC Television Centre in Wood Lane in London. Hundreds of people shouted slogans like "Shame On You BBC" and "Nazi Scum Off Our Streets" to protest against the BBC's decision to invite far-right British National Party leader Nick Griffin onto the show 'Question Time'. This is a highly respected show and anti-fascists argue that the BBC acted irresponsibly by allowing a racist like Griffin on because it gives him the legitimacy he craves. The BBC has said that in the interests of fairness and impartiality and by virtue of his winning two seats in the European Parliamentary elections earlier this year, they could invite Griffin and subject him to the same scrutiny that all political parties are put through. 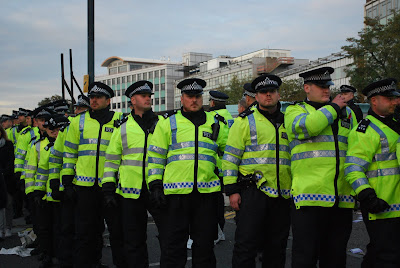 A wall of policemen blocked the protesters from behind and from the front. 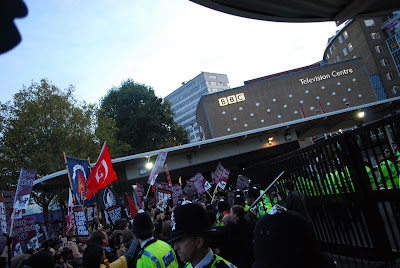 Police blocking one of the main entrances to the BBC Television Centre. Nick Griffin had to go in through another entrance. 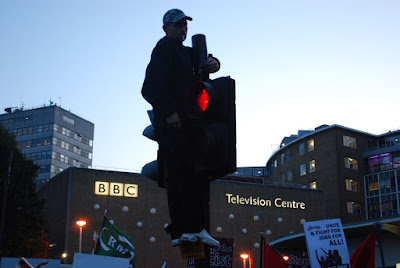 Random dude who had climbed onto the traffic lights. He seemed fairly uninterested in the protest itself. He even had a smoke up there. 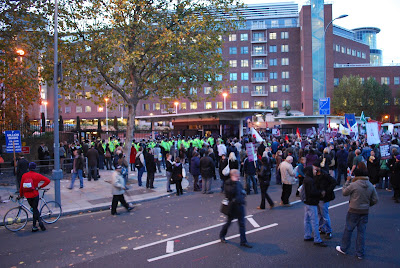 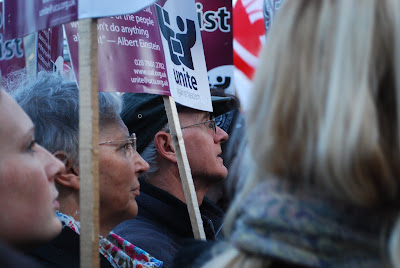 People of all ages and several different ethnicities and backgrounds came for the protest. 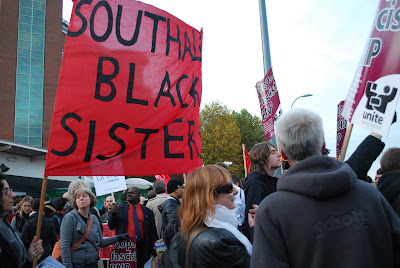 Shakila Mann from the Southall Black Sisters, an NGO working for the rights of Black and Asian women said, "The BBC can make a choice. They have a free will as a broadcaster. They won't show any programs that are pro-Palestinian and get a lot of pressure from the Zionist lobby - for example not to show fund-raising for the Palestinians which happened recently and they made a choice not to run that fund-raising campaign. Why is it that they can make a choice there but can't make a choice on this? 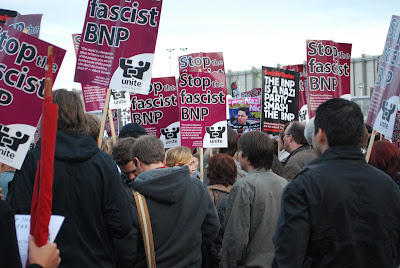 wow, you had some guts to get out there and cover this! Well, I guess that's what journalists are all about! Bravo!...

Is this such a big thing happening there? Interesting! I should read up more on this...

Hey Anjali,
You don't need guts. Seriously. Just a camera and the address to be honest! It was a fairly noisy protest. All over now of course.