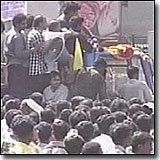 Drunken mobs attacking helpless policemen, burning police jeeps and buses, pelting stones and attacking the media ... but actor Raj Kumar's passing away had little to do with it. It was just the occasion and a great opportunity. The establishment's tenuous grip on law and order is exposed everytime a mob comes face to face with authority. Girish Karnad, one of Bangalore's more famous citizens placed the blame entirely at the doorstep of the Kumaraswamy government. No doubt they did botch it up. Directing and re-directing thousands of people to different venues is like sending a bunch of elephants in heat down a labyrinth. But isn't it unfair to blame it all on the government? Where, oh where, is responsible citizenship? I spluttered with rage when I saw Bangalore youth attacking everything in sight and then grinning like madmen into the camera, stripping the funeral of any dignity. But then again, such occassions are perhaps the only time when the vast majority of the lower middle class and the poor can hit back at the system. The occasion becomes the excuse to attack the same system that on an ordinary day in Bangalore denies the numerical majority of their dignity. Its the rare moment when they are on top.

hi there,
there is a point you are making here. but i suppose talking about the "system" and then blaming the citizen in part, is one and the same. we are the system and we are citizens too. reform in any one role isnt enough. and when one says a change is necessary, it is vital that it is brought about in both the faces of the same coin.

hey there is a good point that u make that the crowd that is revolting is that section that has not been touched by the SHOW glass revolution that has swept Bangalore.....

Unfortunately the development in Bangalore has been one dimensional. It has not been equalitarian... so what happens when one segment of the city grows at a much faster rate than the other??? Disenchantment... Tastefully done up buildings so symbolic of the BPO-IT developed bangalore are the soft targets... why.... A thing of ASPIRATIONAL value.... something which is very much symbolic of the difference in development.

and Dr Raj being the force around which the people fighting for such rights and language chuavanists revolved was an ideal nucleus for the unwarranted show of violence.... Sad but True... All the forces could have done is be prepared.... But knowing the huge huge and often so violent fan following Dr Raj has had u couldnt have expected the govt to be high handed too....

I agree with Sathya. Economic growth has led to growing disparity between the rich and poor, the 'software guys' and the others.

You can see this in daily interactions with auto-drivers and some shop keepers. When an autodriver asks you Rs 50 for a Rs 20 ride, he says, "You're a software guy, you can afford it.", adding that "It's because of you guys that living expenses have shot up here." Beneath the civility there's definitely some mistrust and some anger seeing the glitz and amounts of disposable income that is available to the upper classes.

The problem include the sky-rocketing price of real-estate and rents - Rs 4000 for a small single bedroom is quite usual and absolutely unaffordable for anyone who is not in the IT industry. Coupled with the utter lack of public transport in comparison with the other metros, the problem of affordable housing is growing rapidly. How can the average middle-class or lower class person aspire to buy a house when a sqft costs upward of Rs 400 in any place that is reasonably distant from the city?

Only strong political will and uniform and even faster economic growth can hope to solve this problem...

I think it is an excellent point you have made. In the face of an opportunity, it is the pent up side of our citizenry, which regularly keeps popping its ugly head and not its responsibility. Yes... indeed, the systems put in place in most states of this country aren't worth that mention, but the big query is if irresponsible action such as this - what does burning a bus have to do with a matinee idol, for instance? - is a warrantable retaliation?

Your colleague in Bangalore, Nupur Basum, is very biased towards Kannadigas and Karnataka. When Bangalore was burning, for 2 full days, she kept showering with adjectives, all in bad light.

Also, your write-up is based on NDTV reports only. Please check regional channels to get a 360 degree view of the story. It helps!

Hi Balaji, Yes we are the system... but the system works best if there is change top down... thats not happening.

Hi Sathya and Geekbeyondredemption... i agree.

Hi soul-searching Kannadiga... im not going just by NDTV ... ive followed the story in 'The Hindu' and 'Indian Express' as well. What did the regional channels/papers say? Perhaps you should tell me because i cant read kannada.

This is fine reporting: to present the case, analyze from all perspectives, represent all sections, offer feasible solutions and leave it at that.

Alas, if only NDTV had given such a disinterested presentation of the Khusboo episode. Back then, they conveniently rubbished the "moral implication" of the actress's words by countering it everytime by the denial of "right to expression". No one is denying Khusboo's rights, but many were protesting against the "irresponsible" nature of the comments. For instance, would the actress offer her generous words to her own teen kids?? "Dear girls, pre-marital is okay...blah blah"

The other day Ms.Burkha Dutt along with her panel Mr.Mitra & Mr.Shahbuddin caught the great liberal journalist Mr.Vir Sanghvi pants down. The poor man was grappling with words when asked why about he supports Mr.M.F.Hussein on Saraswati drawings, but condemns the Danish cartoons.

Oh yes! Experience alone doesn't prevent a person from becoming a hypocrite. One must also be conciously honest within oneself to seek/report the truth.

Alaphia, thanks for your reply. Various reports tells that the violence unleashed had political overtones. Don't forget Congress was in the gaddi when Rajkumar was kidnapped by Veerappan way back in 2000. So please draw your own conclusions:)

Chauvinistic and drunk fans....these are the two words continously uttered by Ms. Nupur Basu from morning till noon on April 13. A Bengali will never get to know what Kannada and Karnataka culture stands for?

so now whats on the waiting list now....
God Forbid we have Thackeray in Bombay
Jyoti basu in Calcutta
Karunanidhi in Madras
Kanshiram in UP

I'm sure there will be a competition among the disciples of the demi-gods in our country to do a one-up on Bangalore...
Thanks Bangalore for showing us how to show condolence..

NDTV also didn't seem to pay much attention to the "action" on the streets (aka riots) until it became so
heated that they could not ignore it. CNN-IBN had it right from the start. The entire city had a deserted look as
if curfew had been clamped. All shops were shut and bachelors had to manage with a day of Maggi and biscuits ;)

The urge to be violent is only a natural human feeling. It can perhaps be suppressed by education and a resultant compensation derived from an honourable job.
You destroy those which you feel isn't yours. It isn't yours because you do not feel you belong with it.
The problem with Bangalore is it is two cities co-existing physically, but which is being ripped apart by disparities in wealth, language and education.

Dont know what IBN was doing...Thanks for St. Marys church.

Hi Vivek and Sheks... yeah... but sheks its not all crap. what you mentioned is true too... but like vivek says... its one of the bangalores.

"It was just the occasion and a great opportunity."

hi alaphia,
true that the change has to be top down. hypothetically, if the inertia to change hampers the top from becoming even slightly better, do we have to put up with utter chaos and unruly behaviour all the time? the very thought should be enough to spark another kind of frenzy...this time from the people who belong to the other side of the spectrum. nah...i am talking too cinematic. or am i?

hey! just read about the possibility of chennai getting the first woman commissioner! Hope you get your readers all the inside details on that!
cheers!

God Krishna said...
This comment has been removed by a blog administrator.
Sunday, April 23, 2006

God Krishna said...
This comment has been removed by a blog administrator.
Sunday, April 23, 2006

hey alaphia.. your coverage of youth unplugged today was nice except for a couple of points.. the panel contained far too many IITians(quite a few of them were my friends.. so i kinda recognised it.. plus were there guys from colleges like loyola et all,nah??).. i would have liked it if there were guys from "ordinary" self financing colleges run by politicians.. surely we know what it takes to study in third grade institutes with people who've come in courtesy 69% reservations, poor to nonexistant faculty and the remaining seats comprising of guys who've made it courtesy D for Donation than IITians... I say this with great regret... neways keep up the good work and include ordinary guys like us a lil more...

NDTV is pro-uppercaste. it sucks!

Hello Alaphia,
It would be nice if there was more coverage of the Tamilnadu elections.There was a half hour report yesterday at around 2:00 PM by Ms Uma Sudhir.However, the covergae was highly localized.You could give a more general overview of the secnario and maybe if possible even analyze it with Prannoy and Barkha.
And yes, your Youth Unplugged was nice.Keep up the good work.
bnap

hey alaphia,
this is a GREAT blog.. i really like the way you write... were u a print journalist before?
and i am both envious and nervous at the kind of journalism you do... envious cos, when i write about bangalore, its about how someone bought land at 7 crore an acre (who gives a shit?) and nervous cos... at some point you just want to do features journalism and safely review plays and movies.. do you ever feel that way?

Hello Anon, You're entitled to your views.

We'll be starting some focused coverage next week so do look out for that at 7pm in the evenings.
Thanks about Youth Unplugged.